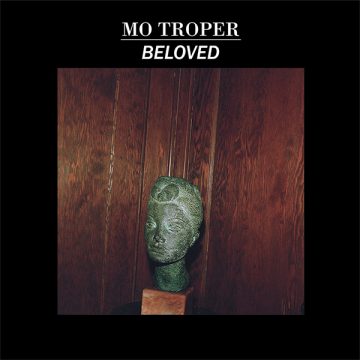 When you hear the term “singer-songwriter” one generally thinks of a lone folk guitarist, sometimes accompanying him/herself with a harmonica hung around their neck, singing weighty songs set to three or four chords. This stereotype is true a lot of times, but artists such as Randy Newman, Tom Waits and Elvis Costello are a few who have transcended the stereotype, bringing a new twist to the songwriting style. Portland-based artist Mo Troper is another singer-songwriter who seems to be on the same page with these legends.

Over the last decade Troper has performed in bands such as Your Rival and Sancho, creating a great a unique version of power pop. Now, as a solo artist he has released his first LP, Beloved.

Troper has described it as an “anti-hypocrisy” album, saying the album was written out of frustration with his immediate friend group and the city of Portland as well.

The album begins with the punchy “Happy Birthday.” Its grungy guitars, heavy-handed drumming, and distorted vocals set the scene for what’s to follow. The tone of the song (and album) bear similarity to Costello’s Blood & Chocolate, with its nasty guitar tone and strikingly bitter lyrics. But in this case the songs are a little more punky than Costello’s.

The influence of The Beatles is also not to be understated here. “The First Monkey in Space” sounds as if it could have been performed by mid-‘60s The Beatles, with its beautiful chord structure and dense harmonies.

While sometimes lost in the instrumentation, Troper’s voice shines through on tracks like “Somebody Special” and the album closer “Teeth.” These songs stand out from the rest with sharp and sour lyrics that cut through your soul.

With the exception a few tracks, the songs are short and sweet, most not even cracking the three-minute mark. This is a great tool as it puts emphasis on the longer tracks, making them stand out.

Beloved is a phenomenal debut album. It’s raw and unpolished but exceedingly confident. It is a heavy listen, but perfect if you’re feeling a little angsty and want to let off some steam.

As a child growing up in the suburbs, Ryan found music as a way to soothe his boredom. After first hearing AC/DC at the age of 10, he was hooked on music. Tracing its roots to the ‘50s, he became obsessed with Elvis, Buddy Holly and Chuck Berry. Somehow that led to grunge, then psych-rock, then jazz, etc. The list goes on and on and his collection of vinyl records continues to grow.
RELATED ARTICLES
album reviewsbelovedgood cheer records
8.0