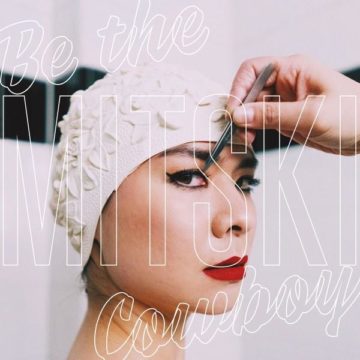 Mitski
Be The Cowboy
Dead Oceans

Mitski may be one of the most intriguing young artists making music at the moment and Be The Cowboy, the follow-up to her acclaimed 2016 album Puberty 2, is again full to overflowing with enigmatic, intriguing, often arresting moments of creativity. It is clear that in the six years and now five studio albums that have passed since her debut, Mitski has grown in confidence and nuance, both musically and lyrically; if you’ve seen any of her videos, she’s no stranger to artistry either.

Be The Cowboy begins with the album’s most haunting tune, “Geyser”, which packs a huge emotional punch considering the short running time. If there is a sub-theme to this album (beyond the artist’s actual creative intent), it may just have to do with space and time in that the majority of the songs run at 2:30, with only two songs of fourteen running over 3 minutes in length. And yet, you never feel as if you’re missing something or being short-changed as the songs are so packed with content, like Mitski made it her goal to make use of every last second of space at her disposal, and to make every last one integral to the development of the song and the cohesion of the album.

I would not try to guess at her creative intent overall, but it is clear that Mitski is unafraid to explore relationships and emotions with a lot of honesty, even if the direction isn’t always clear. In “Lonesome Love” she seems resigned to constantly pursuing unfulfilling partners and yet two songs later she sings about the importance of sticking by her man in “Me and My Husband” (she is, to my knowledge, not married); enigma.

Be The Cowboy may just be as “simple” as it sounds – Mitski is asking each of us to be ourselves, to be our own cowboy and to embrace who we are on this bizarre path we walk every day. Regardless, this is an album that is incredibly arresting and gets better with each listen. Mitski is clearly part of an important revolution in music alongside the likes of Angel Olsen and St Vincent that not just features but values the voices, opinions, and freedoms of young women.

Br. lives in southern Ontario, grew up on The Beatles and The Journeymen, spent his adolescence immersed in grunge, and his adulthood in British alternative. His greatest joy is seeing his son dance and grow into his own appreciation of the indescribable joy of music...
RELATED ARTICLES
album reviewalbum reviewsdead oceans
10