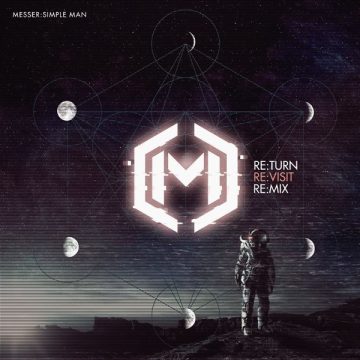 Hard-hitting alternative rock band, Messer, have returned in a unique fashion with RE:TURN RE:VISIT RE:MIX, a collection of remixes of their 2019 single, “Simple Man” made by their fans in a contest through popular music production site Splice.com.  In a time where the live concert industry is at a complete standstill, this strikes me as incredibly genius marketing as a means for the band to engage with their core audience beyond a simple acoustic live stream – whether it was planned with the current pandemic in mind or not.

The album consists of 23 winning remixes that build on top of an already strong single. Originally, “Simple Man” is a high-octane rush of pure adrenaline driven by roaring, crunching vocals, and thrashing drums. Furthermore, the track was a definite highlight on Messer’s 2018 self-titled debut studio album. Now, RE:TURN RE:VISIT RE:MIX is a digital odyssey that shifts the tone, vibe, and style of “Simple Man” – and to a greater extent, Messer, in a wide array of directions.

Most of these remixes sit around modern arrangements that would be well-suited in a club mix that samples the odd guitar line or vocal refrain among electronic beats that hint at the song’s progression or melody, as heard in “Simple Man – Manspro Remix”, “Simple Man – Sirmiser Remix”, and “Simple Man – Cyannrouge Remix”. At its best, RE:TURN RE:VISIT RE:MIX dips into the completely unexpected, and dare I say absurd, with tracks like the funky “Simple Man – Skyfall72 Remix” or the nu metal reminiscent that is “Simple Man – Mist Remix”. Regardless of your thoughts on the idea of a remix, there is no shortage of creative on RE:TURN RE:VISIT RE:MIX.

In many ways, RE:TURN RE:VISIT RE:MIX is a strange choice for a full-length album. Messer did a good job of creating variety among their selection of winning remixes, however, 23 versions of the same song, no matter how different each are, bring a sense of tedium to the album. I applaud the band for going far beyond their rock sound and putting their aesthetic in the hands of others – something that next to no artists would do – and for engaging with their audience in a way that, as far as I am aware, has not been done to this extent. That being said, this album feels a bit like a bonus disc on a greatest hits compilation. RE:TURN RE:VISIT RE:MIX won’t be for everyone, but it does leave me curious as to what steps Messer will continue to take forward that serve towards their own progression as artists, but also change the way up and coming bands stay innovative.