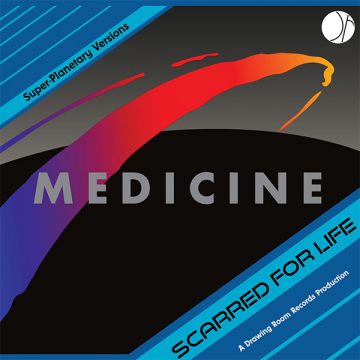 Scarred For Life is an album of covers of 1970’s songs by American noise pop band, Medicine . One look at the front sleeve and the K-Tel-like logo gives you an idea of the origins of the album. No doubt frontman guitarist/keyboardist Brad Laner, like a lot of us children of the 1970s, grew up on those wonderful  K-Tel compilations, and this is his tribute.

Of course, fans of Medicine will understand that these covers are the band’s take on the song and usually do not sound anything like the original. The one exception is Bob Welch’s “Sentimental Lady” that begins quite like the original, but then quickly slides into a noisy grungy version. It works, for the most part.

The same can’t be said for The Monkees’ “Listen To The Band”, which turns a remarkable song into noise. Perhaps if I did not know the source material, it would come off better, however Medicine could have taken this song in a million directions but ended up with a safer approach to it. Whereas Scritti Politti’s “The Sweetest Girl” is the opposite. Medicine takes the song and makes it  sounds like Squeeze fed through an over-modulated sound board. Here it works, and they make the song entirely their own. It is a clear highlight of the album.

Some of the covers work, some don’t. The overall impression left is a very uneven album. While I applaud their intention, I am not so sure they were able to completely pull it off. Laner is a remarkably talented artist, and the band is tight and play extremely well together. The album is expertly-produced and has a great sound, but overall, Scarred For Life is uneven and could have been much more interesting than it is.

Born and raised in Whitby, Aaron discovered music through his love of The Beatles. This led to a career in radio, writing for various publications, and ultimately a radio show about The Beatles (Beatles Universe), which ran for over four years. When not immersed in music, Aaron enjoys spending time with the loves of his life -- his wife Andrea, and daughters Emily and Linda (all of whom have an intense love of music too).
RELATED ARTICLES
album reviewalbum reviewsbrad laner
10