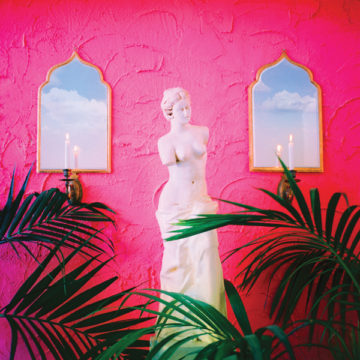 Meatbodies
Alice
In The Red Records

The heavy reliance on distortion and use of special effects makes Alice a fun rock album. It’s gritty, dirty, and rough around the right edges. The mix of psychedelic and garage rock is an interesting combination. With the use of sound effects, certain songs are pushed on the verge of prog rock, making for a mellow story with a heavy presentation.

Founder Chad Ubovich has a history in music. He formed a band in high school, and made his own music when he met Ty Segall and Mikal Cronin. It wasn’t until 2010 that Ubovich was invited by Cronin to join his band, which toured with Segall. In 2013, after Chad and the Meatbodies played with Segall’s band Fuzz, Ubovich recorded his first album. A year later, the band name was shortened to Meatbodies for the second album.

There’s a lot to be said about Alice. Firstly, it’s a story. Somewhere within the lyrics is a story about characters like the King, his disciples, and whatever/whoever Alice really may be. There isn’t a crystal clear narrative, but the poetic and dark lyrics do give some idea of what’s going on.

Accompanied by the psych-grunge sound, the use of sound effects makes the album all the more worth listening to. Kings features a lot of synths, while Alice relies on a lot of distortion, both instrumentally and vocally. It’s a little reminiscent of early Bowie and Floyd, and it even has a brief outer sci-fi sounding bridge. The guitar solo in Disciples is just as out of this world with the space age sounding technology.

Meatbodies plays off on the old school sound, something many rock fans enjoy and still seek out to this day. Although listening to the same songs over and over can get tiring, Alice provides something new for rock fans to hit the repeat button for.

Music and writing have always been a big part of Sabrina's life. She would "borrow" her dad's rock and metal CDs from his collection and listen to them while going through the art books. Although she doesn't write angsty poetry anymore, she does have a Bachelor's Degree in Journalism which she uses to pursue a creative career path. When she's not writing, Sabrina can be found juggling a coffee cup and DSLR or Instagramming her food.
RELATED ARTICLES
album reviewsin the red records
8.0