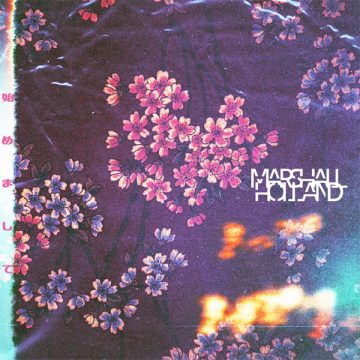 It may seem an odd turn for a singer/songwriter/pop/rock performer to create an album of instrumental electronica, but that is exactly what the San Francisco Bay Area multi-instrumentalist and artist Marshall Holland has done. With full immersion into this genre, Holland has created Nice To Meet You, a loving homage to the classic analogue synthesizer sounds of the 1970s and ’80s, which works beautifully.

Inspired by Holland’s time spent in Japan, Nice To Meet You is the sound of an artist in a foreign land, using ambient sounds and snippets of field recordings from train stations or other public spaces to get an emotional foothold, all the while taking stock to process and understand his new surroundings. Within the structure of the analogue synths and sequencers, sounds emerge almost randomly, surprising the listener’s ear with their human feel and artistry.

There is much to enjoy on this album. The dramatic layers and energy of the track “An Angry Man With A Handkerchief” suggest a slightly jarring public transit commute, as if one were in a video game. Conversely, the calming waves of the main theme of “Good Morning, Osaka” are a beautiful prelude to an eastern dream.

A definite standout on this album is the dancehall-ready title track “Nice To Meet You”. With its familiar pop feel and an Asian nod, this track plays like a cool sampler of classic synth sounds, including vocorder-style effects. This track is enhanced by Holland’s use of live drums, which appear here and on other pieces.

If there is a weak link present here, it may be “Kitaku”, a track which relies more on ambient sound, and progresses more slowly than others on this album. Even so, it does lend a sonic shift and gives the listener space for reflection.

Holland cites the influence of synth pioneers such as Yellow Magic Orchestra and Wendy Carlos on his own work. One also hears a flavour and structure that is at times reminiscent of Gary Numan’s Living Ornaments and Replicas era, in this collection. Holland also adds to this album’s vintage feel by creating the entire work on analogue tape.

In Nice To Meet You, Marshall Holland has presented a work that is simultaneously modern and retro, pensive and light, hypnotic and fun. There is security in the sonic patterns, and hope in the brightness of the sounds in Holland’s palette. A warm and reassuring album in difficult global times.

Bryan Williston has been involved in music since he was a young child. A veteran singer, songwriter, and music educator, Bryan has enjoyed playing a multitude of musical genres in a variety of outfits, over the years. Bryan lives in Whitby, Ontario.
RELATED ARTICLES
album reviewalbum reviews
9.0