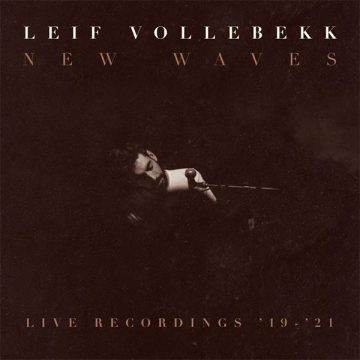 Following his 2017 breakthrough album Twin Solitude with the soul-baring songs of New Ways, Leif Vollebekk continues to deliver deeply emotive indie folk music. Over the course of four albums, the Canadian songwriter has built up a reliable reputation through his intimate songwriting, smooth melodies, and tight production.

New Waves (Live Recordings ’19-’21) is Vollebekk’s first live EP, recorded at a variety of locations over the last three years. Featuring five songs from New Ways, along with a live version of his 2020 single “Long Blue Light,” the EP provides a glimpse into Vollebekk’s raw musicality.

Vollebekk is a deeply emotive musician, whose passion is fully expressed in his live performances. It can be heard in the interplay between his vocals and the string melody on “Transatlantic Flight,” how he effortlessly switches between guitar and piano on “Hot Tears,” or in his chaotic, jangly guitar solo on “Blood Brother.”

“Last year, I had a chance to revisit these songs and I realized they had something my records didn’t have,” says Vollebekk. “They resonate with that incalculable energy of a live audience. It didn’t matter whether they were listening to FM radio on the freeway, watching a CBS broadcast of The Late Late Show at home or standing right there in front me at the Troubadour in LA. The audience completes the music. They inform it and they shape it. They’re on the other end of the frequency and they make new waves of their own. That symbiosis is something during these past two years I’ve missed more than anything. And I feel it on this record.”

Vollebekk’s fans also have the chance to view videos of these live recordings: his live session at KCRW, his performance at the Late Late Show with James Corden, or his official music video of “Transatlantic Flight,” recorded live at Roy Thomson Hall.

While these videos provide a glimpse into how deeply Vollebekk feels the music, not all of the tracks on the live EP feel distinct enough from the studio versions. Vollebekk’s smooth production has defined his previous releases, but this polish feels limiting on tracks like “I’m Not Your Lover” or “Long Blue Light,” where we want to feel Vollebekk’s emotion come through.

Kieran Davey is a freelance writer and music enthusiast from Vancouver, Canada. He particularly enjoys alternative rock, groovy hip-hop, and basically any music from the 60's. Aside from reviewing music, he also loves playing guitar and spending time in nature.
RELATED ARTICLES
album reviewalbum reviewsleif vollebekk
8.0