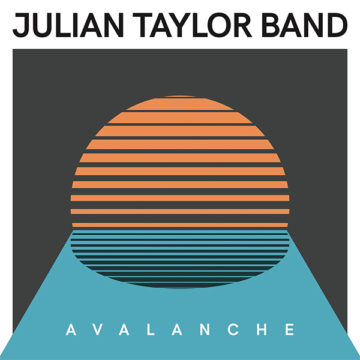 As pioneers of what they call funk, soul, and roll, The Julian Taylor Band has returned with its first album since 2017’s Live At Lee’s Palace and its first set of new material since 2016’s Desert Star. Over the course of the eight tracks which make up Avalanche, the listener is quickly reminded as to not only why the Julian Taylor Band is very much a staple of the Toronto music scene, but why they are among one of the tightest and most unique outfits of songwriters and performers around.

Avalanche kicks off with the effortless and Stevie Wonder-reminiscent groove of “Time”, a truly funky number which showcases all members of the band with a ripe selection of tones ranging from crisp drums and thin guitars – along with a tasteful wah – to accenting horns and a warm organ. Where “Time” may sound like a lost deep cut pulled from the ‘70s as it indulges in both funk and a mellow, vintage rock style, “Take What You Need” pulls from soul music with a slight psychedelic undertone to it. Should you be interested in a more modern sound, the following song, “Back Again” feels in the same vein as Jack Johnson or The John Mayer, circa 2006.

While The Julian Taylor Band may draw influences from a number of sources, their work feels incredibly fresh and original. Taylor’s ability to seamlessly blend elements, techniques, and styles that are often conflicting in such an organic manner is thrilling. Where “Time” feels greatly influenced by Wonder, “Avalanche” and “Gone” feel reminiscent of ballads from The Rolling Stones, “Learn To Love” is comparable to Lenny Kravitz, and dare I say, “Sweeter” brings The Julian Taylor Band to a funk, rock, and blues synthesis in a fashion similar to Prince.

Front to back, Avalanche is a stunning record which pushes the expectations of traditional funk, soul, rock, and pop music. The Julian Taylor Band once again set themselves aside as truly one of the best outfits to come out of Toronto, and perhaps Southern Ontario, with an album which is a songwriting and performance marvel. Without a doubt, Avalanche will be a highlight of 2019, one which I would highly recommend to everyone.

A passion for music has always been a part of Gerrod’s life. As a young boy, he was raised on a steady diet of the music from The Chili Peppers, Aerosmith, The Stones, Prince, and others from his mum. Raised in the GTA, Gerrod continued to foster his love for music by attending a wide range of concerts and learning the drums. His unapologetic passion for music has no bounds and has spread to a wide variety of styles, whether it be the 90’s rock that sound tracked his teenage years, the jazz he studied in university, or his newfound love for hip-hop. He recently received his bachelors in music and education from York University and is passionate about writing and reviewing good (and less than good) music. Gerrod is also the drummer and songwriter for a Toronto based rock & roll band, One In The Chamber.
RELATED ARTICLES
album reviewalbum reviewsavalanche
9.0