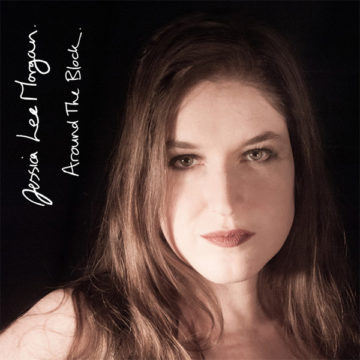 Jessica Lee Morgan comes from a very musical family. Her mother is singer/songwriter Mary Hopkin (“Those Were The Days”) and her father is producer/musician Tony Visconti (David Bowie, T. Rex to name just two).  Her brother, Morgan Visconti, is also a musician of note.  Around The Block is Jessica Lee Morgan’s second solo album.  Her debut album, I Am Not was released in 2010, but during the past seven years she has toured as a solo artist and as part of the Holy Holy tour with her father.

Around The Block is a unique blend of folk and rock. Christian and Jessica co-produced the album and have a very clear understanding of how to producerom Jessica. The arrangements throughout the album range from sparse to a very full compliment, however the backing is never overpowering nor is it ever overproduced.

Lyrically Jessica writes very straightforward words to accompany the music. “I Am Not” contains fantastic lyrics that address the issue of not being identified by external conventions (such as occupations, appearances, reputations). A brilliant song and a beautiful way to kick off the album. It is also the name of her debut album, so it serves as a link. Many of the songs have an autobiographical feel to them, and Jessica sings them with conviction.

Around The Block is a statement from a serious artist. “I Am Not”, the first song on the album, sums up the album.  Yes, she comes from a famous, musical family, but that is not who she is. She is Jessica Lee Morgan and needs to be heard in this light. Not as a daughter but a serious singer/songwriter.  A great sophomore release, and I hope that there is not another long wait for her third album.

Born and raised in Whitby, Aaron discovered music through his love of The Beatles. This led to a career in radio, writing for various publications, and ultimately a radio show about The Beatles (Beatles Universe), which ran for over four years. When not immersed in music, Aaron enjoys spending time with the loves of his life -- his wife Andrea, and daughters Emily and Linda (all of whom have an intense love of music too).
RELATED ARTICLES
album reviewsaround the blocki am not
7.0