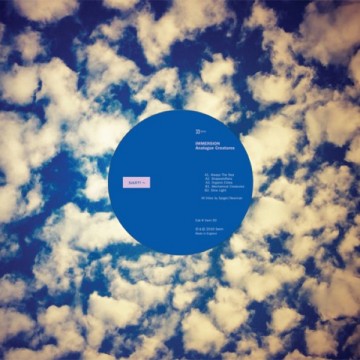 It has been a little more than 40 years since Brian Eno released his golden-ratio-obsessed avant-pop masterpiece Another Green World, and from that time till now, its influence has only grown. All contemporary electronic music is indebted to his work in that period, and on Analogue Creatures, the new aptly named 10” from drone-duo Immersion, the same Eno-inspried synthesizer/guitar combination resurfaces, this time in the form of five discrete and somewhat interesting marbles of sound.

On opener “Always The Sea,” a softly strummed guitar makes delayed intrusions on a warm, gliding drone. You can almost hear the orange and blue clashing at each other as the track climbs to the peak of its mountain of sound before admiring the view and promptly descending down the other side.

“Shapeshifters” offers another delayed guitar loop, this time with more bite. When the drums come tinkering in, a delicate soundscape reminiscent of Roy Montgomery’s Allegory of Hearing is conjured up. The flanger-effect guitar froths while the bedrock-drone hums like a caged animal.

“Organic Cities,” which could’ve been a Megaman theme song, follows the swelling pattern of the opening track, this time with steely guitar and floating drones.

“Mechanical Creatures” swims in a lake of syrupy synthesizers. The high-register spurts of sound careen and plunge like seabirds above a throbbing bassline melody. This piece evokes the same feeling one gets from staring at an early-period Renoir; each synth sample smudges at its neighbour’s edges, resisting clear definition and favouring dynamism over detail (though, paradoxically, it is exactly this overload of detail which creates the smeared illusion).

“Slow Light” is a very angular piece, though the overlay of pedal effects mimics Christian Fennesz’s more shoegaze-y work. The final 10 seconds feature a delicious fade-out that perhaps should have been prolonged.

Analogue Creatures differs from Eno’s Another Green World in both concept and biography. This is not a challenging or inventive work – it differs very little from the krautrock-electronics that Kraftwerk introduced with their self-titled 1970 debut – but I don’t think that was the goal Immersion members Malka Spigel and Colin Newman had in mind. Analogue Creatures lacks the experimental excitement of Immersion’s 1999 double-LP Low Impact, but if taken as an homage to organic formalism, it provides a wonderful dose of nostalgia.