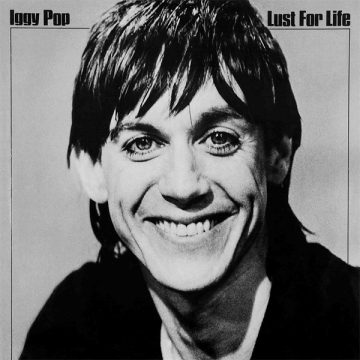 Iggy Pop’s second solo album, made in collaboration with David Bowie and recorded in the divided city of Berlin in 1977, has gotten the reissue treatment. Critically acclaimed, Lust For Life fundamentally altered the landscape of post-punk, helped cement Pop as the godfather of punk, influenced countless bands, and motivated others to break loose and dance shirtless in their bedrooms without a care in the world for 41 minutes, the album’s running time. Bundled together in a 2-CD Deluxe Edition is the remastered Lust For Life album, plus the additional live album TV Eye Live 1977 (or TV Eye).

Originally released mere months after The Idiot, Pop’s first solo venture, and written, recorded and mixed in just eight days, Lust For Life
spawned two of the proto-punk icon’s best-known songs, the instantly-recognizable bouncy drumbeat of “Lust For Life” and the springy rhythm of “The Passenger,” which come blaring through the speakers like fighter jets. Backed by fantastic cuts such as “Success,” “Some Weird Sin”, and “Tonight,” Lust For Life sees Pop pivot from the electronic sounds and moody atmosphere of The Idiot to channel a primal aggression reminiscent of his work with The Stooges.

Disc two features eight remastered tracks from the live album TV Eye, which were recorded in ’77 from live shows in Cleveland, Chicago and Kansas City. Once again, Bowie is present playing keyboard on select tracks. While there is an amateurish and dirty quality to the sound that makes it feel like a bootleg, the live atmosphere and raw energy add layers to the wall of sound. “I Got A Right” is powerful, “I Wanna Be Your Dog” slaps, and this version of “Lust For Life” is sonically much darker. Regardless of the sound quality, Pop remains poised and attacks the vocals in a manner that cuts through any unevenness like a switchblade.

Simply put, Lust For Life is a masterpiece. It’s fun, raw, and brimming with rock ‘n’ roll flavour; it’s infinitely entertaining and a non-stop wave of excitement; Its off-the-cuff lyrics are potent and evocative. It is Iggy Pop at his sharpest, and this deluxe edition reissue makes revisiting the classic album worth the trip for any Pop fanatic.