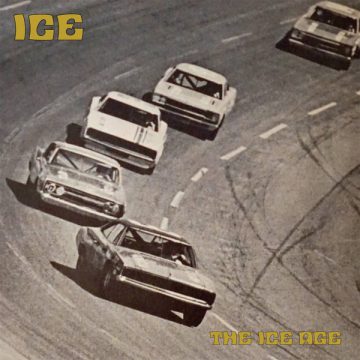 In 1970, heavy psych-rockers Ice recorded their first and only album at 8-Track Studios in Chicago, Illinois. The band would break up not long after committing only 10 tracks to tape. Two of these songs were eventually released as a single in 1972 but under the alias Zukus! For 50 years, their 2-inch master tape had been shelved and forgotten, until now.

The Ice Age, is an incredible find. It’s one-part Blue Cheer, and another part Grand Funk Railroad. Recorded at the tail-end of the psychedelic movement, roots music had really made a comeback the previous year, it may have sounded slightly dated upon its release. Nevertheless, the content would still have been strong.

Despite hailing from the Midwest, Ice’s sound is incredibly California-esque. “Gypsy”, the album opener, has essence of the Byrds albeit with a heavier edge, while “Catch You” has a soft, almost Doors like feel.  Any one of the 10 tracks would have been a perfect soundtrack for cruising on the Sunset Strip.

The standout track on the album has to be “Run to Me”. Kicking off with a fuzzed-out guitar riff, similar to something King Gizzard may produce today, this some reeks of the American road.

It’s hard to believe something of this caliber has been lost for five decades. It’s clear that Ice had showed promise incredible promise, they had even opened for the likes of Kenny Rogers & the First Edition and Three Dog Night.

The Ice Age is one of those rare mysteries in rock that has finally surfaced; and thank God for that.

As a child growing up in the suburbs, Ryan found music as a way to soothe his boredom. After first hearing AC/DC at the age of 10, he was hooked on music. Tracing its roots to the ‘50s, he became obsessed with Elvis, Buddy Holly and Chuck Berry. Somehow that led to grunge, then psych-rock, then jazz, etc. The list goes on and on and his collection of vinyl records continues to grow.
RELATED ARTICLES
album reviewalbum reviewsridingeasy records
8.0