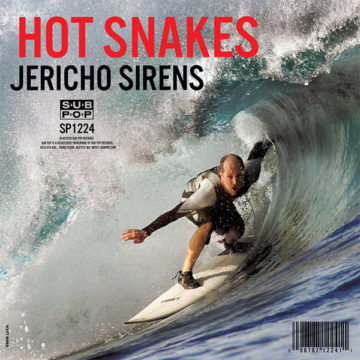 Rock’s not dead — it’s alive and well, and just got a kick in the ass with Jericho Sirens, the new album from Hot Snakes. While it has been fourteen years since their last release, (2004’s Audit In Progress), this post-hardcore band’s new album seriously rocks.

Rage and indignation are the order of the day here, served up with heavy riffs and driving guitars a-plenty. In fact, “rage” basically defines the band’s worldview. In the words of guitarist John Reis, “I miss rock ‘n’ roll music that’s against things, even if it’s just as simple as being against fucking bullshit, or saying, ‘Fuck, that sucks’! No one says anything fucking sucks anymore.”

The tone of Reis’ sentiment is set with the lead off track, “I Need A Doctor”: an actual plea for help, which shines a light on the need for accessible, affordable health care. Right off the top, the listener is immediately grabbed by the intensity of the performances: the primal (and at times indecipherable) vocals of lead singer Rick Froberg, the manic, furious guitars of both Froberg and Reis, and bottom-end duties solidly covered by bassist Gar Wood and tag-teaming drummers Jason Kourkounis and Mario Rubalcaba.

The band takes us every which way in this ten-song collection. From the rapid-fire rhythms and jarring time signature changes of “Candid Cameras”, to the amphetamine chainsaw guitars of “Why Don’t It Sink In?” (clocking in at 78 seconds!), to the radio-friendly melodic treat of “Six Wave Hold-Down”, Hot Snakes delivers the goods.

With its intensive dynamic build-up, the title track, “Jericho Sirens” is heavy enough to please old fans, and hook-y enough to win new ones. It’s the kind of song that would not be out of place in a superhero movie action sequence (are you listening, Marvel Cinematic Universe?).

If this album has any faults, they lie within the “sameness” of the band’s sound. There are a couple of absolute gems at the end of the recording, but ‘round about the halfway point, the ears grow a tad weary of the “riff/scream/shred/rant” presentation of the tunes. Still, what we might not like about Hot Snakes could also be what we love about them: a kickass, righteous sound that’s true to the genre, with integrity of artistic intent. You owe it to yourself to hear this music.

Currently on tour, and with plans for future releases, Hot Snakes is in it for the long haul.

Musician, writer, and grandad Bryan Williston is a fan of music in all of its forms. He loves to listen to, play, and talk about music, and to share his ideas with others. Despite the failings of humans, he is hopeful about the future, and thinks that Spill Magazine readers are just the best. Bryan lives in Whitby with an assortment of people and dogs.
RELATED ARTICLES
album reviewssub pop
8.0