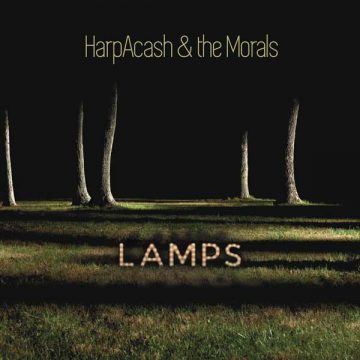 Lamps, the first full-length album to come from HarpACash & the Morals, presents nine impeccably distinct tracks from a band that clearly has every business being in this business! The album, which was released on the 23rd of September, tantalizingly dips through the channels of Indie, Folk and Pop as it leaves behind a mawkishly haunted aftertaste to the listener’s musical palate.

The album opens strongly with the single “Modern Comfortable.” Following with it an accompanying music video paying homage to childhood fort-building, the listener and the viewer alike are filled with a chill of nostalgia to the brooding vocals of HarpACash. Guitarist Todd Jeffrey and Drummer Daniel Trickett carry strong musical accompaniment that builds unexpected riffs demonstrated time and time again. “In My Room” is perhaps the most notable with a sudden twist from the silky ethereal coffeehouse opener to the bold percussion that wakes up roughly 30 seconds in.

After releasing the EP Music Tree Life Understanding under producer Steve Singh back in 2012, the band picked up serious momentum. The Barrie, Ontario trio began opening for the Cowboy Junkies (as well as The Strumbellas and Elliott Brood) and was quickly scooped up by the band’s founder and producer Michael Timmins. The success was then left to be written under the band’s raw sound quality and the tragically romantic tunes being crafted by HarpAcash and Jeffrey.

The album Lamps is available today for those looking to capture a new sound in their music repertoire. HarpAcash & the Morals will be playing The Burdock in Toronto on October 6.

Emily Rubin is a lifestyle writer who focuses most of her efforts in the fashion & digital marketing spaces. She forayed her modern version of pen to paper time into the world of Spill Magazine to uncover new music aside from the “Discover” playlist on Spotify. With an eclectic musical palette, Emily reviews a wide host of tunes for Spill, but her concert coverage exclusively explores the scene of her native Montreal.
RELATED ARTICLES
latent recordings