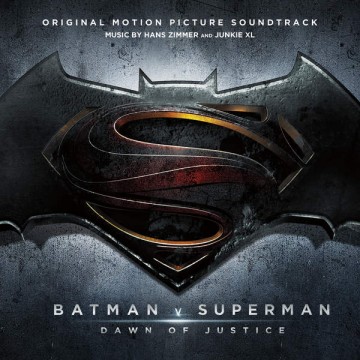 DC’s Highly anticipated Batman v Superman: Dawn of Justice hits theaters March 25. This über launching of the latest DC series to the superhero cinema market is produced by two soundtrack virtuosos, the Academy Award-winning Hans Zimmer and highly acclaimed Tom Holkenborg, aka Junkie XL. This big spring blockbuster that fans have been waiting for has a booming musical accompaniment to match the hype.

It is a tremendous bass-driven soundscape that adds a heavy layer of drama to the movie as a whole. Immediately there are thunderous and sporadic low-tone sounds, which create the feelings of fast-paced tension and concern. This will set the stage for what seems to be an intense action-packed endeavor. The album’s voluminous hums and warbles match the heightening of one of Zimmer’s previous soundtracks, Inception. The exaggerated yet well-timed barrage of percussions are fit to accompany the heavy-hitting heroes through their suspenseful screen time. They add a bold layer to the film’s ambiance with expressive pops, like an explanation point to a sentence. Zimmer’s traditional theatrical orchestration is complemented by Junkie XL’s more energetic experimental sound. The sounds fuse together to create an emotional pandemonium. Angelic hymns, dicey echoes, elegant strings and magnet piano chords often accentuate the heavy and abrupt booms. There is much variety throughout the tracks to change the listener’s perception of the surrounding atmosphere. This helps portray a variety of moods as we watch The Dark Knight and The Man of  Steel play across the silver screen.

Track three, “The Red Capes Are Coming,” has an eerie sound to it like a marionette puppet tip toeing across an old dusty piano. Then toss in a few low-pitched anchor chords being played by a madman, with some lingering violins in the background for the full creepy effect. Compositions can change multiple times from smoother inflections to blunt clashes of noise even throughout a single track, which can disorient the listener and give the illusion of certain tracks blending together. This would be avoided in the movie but shows the roller coaster of astonishment and discomfort being portrayed musically.

“Do you Bleed” is the midway point of the soundtrack and a clear roaring and suspenseful climax, building mass amounts of tension and excitement in a pinnacle plot point. Where the following tracks “Problems Up Here” and “Black and Blue” prompt a more mournful helplessness in the listener’s mind. “Is She with You?” features a wailing guitar reminiscent of of the ‘90s X-Men theme song overlaid with a series of loud drums aggressively beaten in unison.

If there were one word to describe this album it would be powerful, whether that be the chaotic fuzzy bass noise scattered throughout a superhero symphony or the anxiety-inducing timing of a thriller movie.

On its own Batman v Superman: Dawn of Justice may be a little overwhelming for your average Joe’s daily happenings. But when being blared alongside the illustrious adventures of our altruistic action stars, the soundtrack seems to enhance the already exciting premise of the film. Hans Zimmer and Junkie XL have co-produced another zealous piece of movie pop culture as more and more comic books hit the big screen. Their idiosyncratic timing mixed with eccentric boisterous sounds give this over-the-top movie that extra punch it deserves.