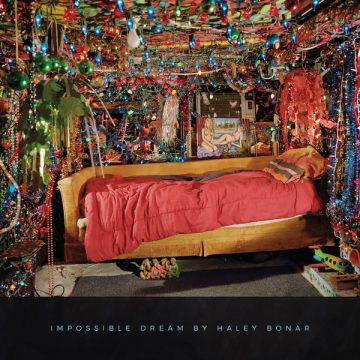 “What I write is born of my own set of memories and ideas, and once they are released into the world, they do not belong to me anymore. The interpretation is all yours, therefore these stories are yours.”

After quitting school at age 20 to pursue a career in music, Haley has released four full-length albums, several EPs, started a Punk/New-Wave side project and tours across the world alongside other artists.

“Kismet Kill,” the first single of the album, unveils with gritty guitars and lyrics of reaching adulthood but still wanting to cling on to adolescence; nudging at a midlife crisis. “And now we’re the kids who got kids at parties,” makes a touching yet brutal truth to the matter. There are so many songs out there that are anthems to not wanting to grow up; this song appears to describe the aftermath when the undeniable fate catches up to us.

The bittersweet theme in “I Can Change” lets Bonar’s eerie and gripping vocals flow effortlessly. This track is one of the centrepieces to the album, being an all-around treat for the ears.

As satisfying as it is, I couldn’t help but hear a bit of Best Coast’s instrumental style in certain tracks, as well as vocal similarities to Emily Haines from Metric, and Lana Del Rey.

Impossible Dream wholeheartedly shows Bonar’s gift for storytelling. With more than one road to travel on, it’s up to the listeners to discover what they’ll take from their own insight. It’s truly a kaleidoscopic thrill.

The Spill Magazine is a Toronto-based online publication dedicated to covering the independent music scene with a strong focus on our thriving hometown talent. Our writers bring you up-to-date news, in-depth features on musicians and reviews for the latest CD releases. We also travel to the front lines for all local festivals including Canadian Music Week and North by Northeast. Don’t forget to check out our Facebook and Twitter pages for all daily Spill updates.