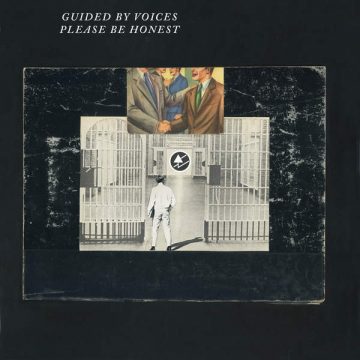 Guided By Voices’ new album, Please Be Honest, boasts aggressive melodies and biting lyrics accented by the rise and fall of the album’s two consistently wonderful guitars. Please Be Honest marks the Dayton, Ohio group’s 24th studio album as well as the return from their second breakup, which took place in 2014.

“My Zodiac Companion” is a fantastic, wailing opener and is immediately followed by the upbeat “Kid On a Ladder,” which invokes a lo-fi British Invasion feel. The album continues with equally lo-fi, discordant tracks, like “The Grasshopper Eaters,” throughout. The discordant sound of the album complements Robert Pollard’s voice and allows the band’s newcomers to shine. Please Be Honest is Bobby Bare Jr., Nick Mitchell and Mark Shue’s first album with Guided By Voices. “Glittering Parliaments” is a highpoint for the newcomers with Bare and Mitchell playing two equally exciting guitar lines over Shue’s melodic bass guitar. “I Think a Telescope” is an entrancing, imaginative song that stands out from the other tracks on the album. The two synced-up guitars and Pollard’s layered, stop-and-start vocal line combine to create a truly mesmerizing effect while the lyrics are thoughtful and clever. “Nightmare Jamboree” is everything it sounds like. Ominous guitar and vocal lines come together with sparse, creepy lyrics before the song plays out and suddenly ends. The final track “Eye Shop Heaven” sounds like what might have happened if Soundgarden had merged with a 1960s pop group. The growling, lyrical verses accented by an amped up lead guitar are contrasted by choruses that focus in on drums, melody and a more rhythmic guitar line.

Please Be Honest is never boring. It is a varied album that attests to Pollard’s imagination and creativity. Since their formation, Guided By Voices has released 24 studio albums and more than 500 songs but they continue to put out original and exciting new music like this album.

Daniel Mallett is a young journalist from London, Ontario pursuing a career in arts and entertainment writing. He enjoys music, theatre and visual arts and hopes to learn as much as possible about the artists working in Canada today. Mallett is also one half of the Toronto based folk duo Howl & Other Problems.
RELATED ARTICLES
album reviewsguided by voices
8.0