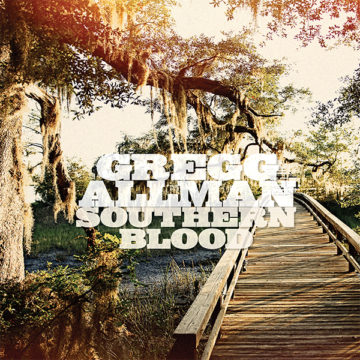 On May 27th, 2017, the world was shocked to hear of the sudden passing of music legend, Gregg Allman.  Allman, who had quite an extensive and incredibly innovative career as a founding member of The Allman Brothers Band- as well as an extensive solo career- is a musician who’s legacy is not so easily fit into a box. While it is easy to group him among the classic rockers- as he often is- he was also a musician deeply in touch with the blues and jazz, often tying them into his rock driven career in a seamless fashion, which is exactly what made him and The Allman Brothers Band stand out so much. Despite his ailing health in the past year, Allman was hard at work on what is now his final studio album, Southern Blood. Produced by none other than Don Was, a man nearly as eclectic as Allman, having worked with everyone from The Rolling Stones to Stone Temple Pilots and John Mayer, and backed by the final incarnation of The Gregg Allman Band, Southern Blood is an album that is as much a heritage piece to the deep south as it is to Allman’s legacy.  Born in Nashville, Tennessee, and having spent a large portion of his early career based out of Macon, Georgia, Allman was no stranger to the American south, in fact, the Allman Brothers are often known for having spawned the southern rock genre, but curiously, despite being such a renowned songwriter, Southern Blood only includes one original song. The other nine songs are by a collection of artists who range from classic rock, the blues, folk, and funk, giving the listener an excellent sample of the diverse musical culture and heritage of the south, a region that greatly shaped and was later shaped by Allman himself.

Opening with “My Only True Friend”, the sole track penned by Allman, the listener is greeted with a blues inspired ballad with a gentle swaying feel. The track develops, creating a feeling of musical growth as it incorporates a tasteful guitar solo and beautifully played horns overtop a steady groove and light piano. Lyrically, the song confronts Allman’s limited time left in this world while giving both the audience and Allman himself a chance to look back on his life where he claims that the road- and likely the music which he played along his journey- is the true friend mentioned in the song’s title. The song isn’t supposed to start the album off with a bang; rather, in a manner likely inspired by David Bowie’s Blackstar, “My Only True Friend” is Allman’s final message and gift to the world, thanking his friends, family, and fans for a musical career which spanned over four decades. The song is intense and has a lingering feeling of sadness without regret that clashes with the grateful and sentiments and joy felt over a life well lived. Despite the strange juxtaposition, the song feels honest which makes the idea of Allman contemplating his own mortality that much more real.

Of the other nine tracks, Allman has chosen to cover tracks from artists of the likes of The Grateful Dead (“Black Muddy River”), Tim Buckley (“Once I Was”), and Scot Sharrard (“Love Like Kerosene”), among others. His selection not only highlights his own inspiration throughout much of his career, but also encapsulates a soundtrack to the south, ranging from bluesmen to folk singer-songwriters to southern rockers, Southern Blood is a carefully curated collection that caters to both the region’s cultural history as well as to Allman’s own musical interest. Of the covers, his rendition of Bob Dylan’s “Going Going Gone” stands out for its soulful quality that greatly contrasts with another standout cover of “I Love The Life I Live”, originally by Willie Dixon; a track which see’s Allman at his brashest and most powerful as he confidently belts out across the classic blues number.  While each of the covers prove to be nothing short of excellent, the closing track, “A Song For Adam” not only features Jackson Browne- the original songwriter behind the song- but showcases an excellent collaboration that may have been among Allman’s last.

Southern Blood is an excellent album by any standards, but considering it is the final album from Gregg Allman, the record acts excellently as a bookend to his career. With the exception of the opening track, “My Only True Friend”, all the songs are covers, and while I’m curious as to this choice, I would have loved to have heard more originals from the late icon. That being said, each cover is performed excellently and thematically, it makes for a very cohesive album. Similarly to Bowie and Prince, there is something admirable about someone using the last of their life to create one final record.  It is this devotion to his passion that makes Allman’s Southern Blood shine as bright as it does, just as it has made his career standout in countless of ways. Rest easy Gregg, and thank you for all the music.