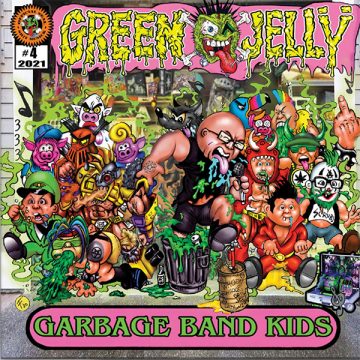 Punk rock outfit, Green Jellÿ have returned with their fifth album, Garbage Band Kids. The 17-track record – their first since 2009’s Musick To Insult Your Intelligence By – features appearances from the likes of Fishbone’s Angelo Moore, Suicidal Tendencies Louichi Mayorga, The Trailer park Boys, as well as “Weird Al” Yankovich and others to create an unexpected punk thrasher that is not afraid to fly off the rails.

Garbage Band Kids opens with the up-tempo pulse of “Pukebox” where Green Jellÿ claims themselves as the kings of parody, and even challenge Yankovich to a “parody smackdown” only for a voicemail from Yankovich closing the song denying their challenge in a humorous way – was he in on the joke, or did Green Jellÿ simply take their rejection call and turn it into a fantastic cameo at Yankovich’s expense? We’ll never know, but it’ll make you burst in laughter regardless. Living up to their lofty claims, the band takes on the classic Spongebob Squarepants theme song on the following track, “Silence Of The Squarepants” where they paint a story of Krabby Patties being made from human flesh set over a heavy metal song ready for a stadium.

Without missing a beat, Garbage Band Kids rolls along with a series of songs that bring the laughs alongside some great music. While Green Jellÿ is often revered for their lyrics, the music on their latest album is also noteworthy – something which most comedy bands or parody artists miss the mark on. Songs like the lead single, “Punk Rock Pope”, the relentless “Champion”, the ‘90s funk rock and riff heavy “Boy Who Cried Wolf” are fantastic examples of this and are some of the best the album has to offer. Additionally, songs like “Beat My Meat”, a rerecorded version of their seminal hit, “Three Little Pigs”, and the Tool inspired “Mægnus Ærena” also shine above the high bar set on Garage Band Kids.

All in all, Green Jellÿ are back and have firmly established themselves as not only hardcore punk veterans who can still kick it as hard as they did back in ’89, but also as leaders of parody and comedic music that actually rocks. Fans should be more than excited and satisfied with Garbage Band Kids and should be excited for what Green Jellÿ has planned next. This record stands up to their classic works and should be followed as soon as possible with more Green Jellÿ.

A passion for music has always been a part of Gerrod’s life. As a young boy, he was raised on a steady diet of the music from The Chili Peppers, Aerosmith, The Stones, Prince, and others from his mum. Raised in the GTA, Gerrod continued to foster his love for music by attending a wide range of concerts and learning the drums. His unapologetic passion for music has no bounds and has spread to a wide variety of styles, whether it be the 90’s rock that sound tracked his teenage years, the jazz he studied in university, or his newfound love for hip-hop. He recently received his bachelors in music and education from York University and is passionate about writing and reviewing good (and less than good) music. Gerrod is also the drummer and songwriter for a Toronto based rock & roll band, One In The Chamber.
RELATED ARTICLES
album reviewalbum reviewscleopatra records
7.0