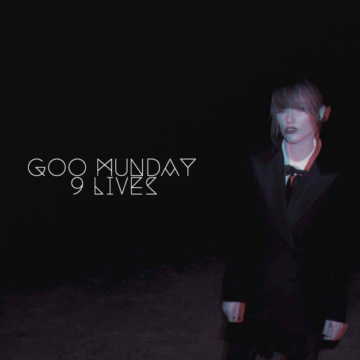 From Sydney, Australia comes Goo Munday. An artist who is making inroads into the dark EDM music scene. 9 Lives is her debut album, and following her self titled debut EP, Munday delivers an electronic album that is dark, powerful and hard driving. Everything you would expect from Munday. In many ways, this is EDM Punk.

9 Lives is not for everyone. But those who like heavy EDM will embrace this album. It is relentless in the sounds, music and energy. To my ears, plays as one long song, and that is the point. The tracks run together, not allowing the listener time to breathe. That is the goal Munday has set out, isn’t it? Munday’s music has been described as ‘witch house’ which sells the album short. Sure this is dark, grimy, industrial dance music, but there is a lot going on on this album. From the stark driving beats, to the interwoven vocals, this is EDM but Munday’s own version of EDM.

Lyrically, it is a dark view of where we are and where we are heading. Maybe we have nine lives, maybe not, but Munday is going to be sure to sing about each of those lives. The lyrics match to the music perfectly and, as a whole, the project is very successful.

Although it is mostly a solo effort, she does work with Sidewalks and Skeletons on the last song, “Rebirth”, and this is a match made in heaven, or hell. Much like the remix Mr. Kitty did for Munday (“F**k Your Fear”)  earlier this year, Sidewalks and Skeletons understand Munday and have a shared vision of her sound and ultimate goal.

Munday has delivered a great debut album. She attacks the songs with her keyboards and computers and her vocals are the added ingredient to complete the picture. There are a number of stand out songs, and I predict several of these songs will be remixed and find themselves new audiences through that venue. In the meantime, Munday has produced a strong album. This is not sit down, grab a book and sit in front of a fire type of music. This is aggressive, electronic music designed to get you moving, both physically and mentally!

Born and raised in Whitby, Aaron discovered music through his love of The Beatles. This led to a career in radio, writing for various publications, and ultimately a radio show about The Beatles (Beatles Universe), which ran for over four years. When not immersed in music, Aaron enjoys spending time with the loves of his life -- his wife Andrea, and daughters Emily and Linda (all of whom have an intense love of music too).
RELATED ARTICLES
album reviewalbum reviewsnegative gain
9.0