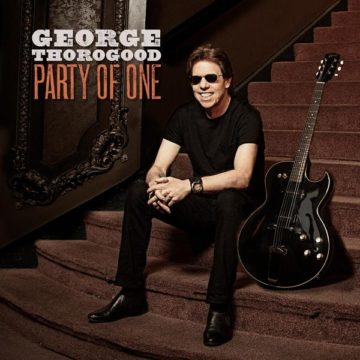 After 16 albums with The Destroyers, Thorogood goes solo with Party Of One. Most of the music on the album is played by Thorogood solo.  He plays slide, dobro and guitar. All unplugged and played with a mission. Jim Gaines, the producer of this album, has worked with Thorogood in the past (The Hard Stuff, 2006; Ride Till I Die, 2003; and The Dirty Dozen, 2009) as well as producing John Lee Hooker, Stevie Ray Vaughan and Luther Allison. The bottom line, he knows how to produce Thorogood and he knows the music Thorogood is covering on this album.

On Party of One, Thorogood takes on the classics.  John Lee Hooker, Elmore James (his version of “The Sky Is Crying” is stunning, vocally and musically), and Robert Johnson. Thorogood also tackles Dylan’s “Down The Highway”, and Johnny Cash’s “Bad News”.  For good measure, even The Rolling Stones “No Expectations”. He makes these songs his own, while respecting the history of the artist and the song. This is not an easy accomplishment.

This album seems to free Thorogood. Without his Destroyers, who are an excellent band, he is able to cut loose and be himself. He digs into the music and lyrics of these classic blues songs and just lets. His voice is stronger than ever and he sings with extreme conviction. He seems to have lived the life of each song.  After forty years recording music it is like he himself is rediscovering the music that influenced him.

Thorogood has made many albums and could run the risk of getting into a rut., however, he is a talented, smart artist.  He has not so much reinvented himself with this album, but he successfully shines the light on different aspects of his performance. Here his musicianship shines and he demonstrates that he is the master of slide and acoustic guitar.

Party of One is a brilliant album. It proves that Thorogood has a great deal of life in him and I, for one, hope that he continues in this direction.  It is a near perfect album and one that is ideal for blues purists as well as the perfect summer album.  It is a welcome return to Rounder Records (an incredible record label) and stunning debut.

Born and raised in Whitby, Aaron discovered music through his love of The Beatles. This led to a career in radio, writing for various publications, and ultimately a radio show about The Beatles (Beatles Universe), which ran for over four years. When not immersed in music, Aaron enjoys spending time with the loves of his life -- his wife Andrea, and daughters Emily and Linda (all of whom have an intense love of music too).
RELATED ARTICLES
album reviewsbad newsgeorge thorogood
9.0