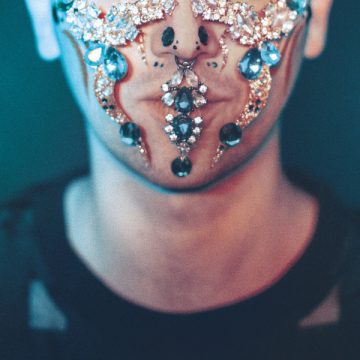 Reality is a fluid concept for Parisian musician, Matthieu Roche, who makes sparse, menacing synthpop under the pseudonym Fragrance. Taking cues from classic synth sounds of the ‘80s and ‘90s, Now That I’m Real is a dark, introspective journey. Within its bouncing electronics and danceable rhythms, there is a pensive melancholy, a loneliness that is explored and emphasized by minimalist elements dropping in and out of the stereo field.

While the mechanical four-on-the floor grooves of standout tracks like, “So Typical” and “Crawling to the Void” don’t necessarily reinvent the synthpop wheel, there is a spatial depth and contemporary sheen that keeps Now That I’m Real from sounding completely nostalgia-driven.  His stark vocal movements and perfect rhyme schemes materialize as mystical incantations of love, lust and longing.

“I needed more time/
I had to find you on the other side/
Yes, it was a captivating ride”,

he sings on opening track “Gone in a Wink”. Lyrically,much of the project attempts to explore the complex, often sinister dynamics of infatuation.

Overall, Roche’s newfound reality on Now That I’m Real will appeal to fans of synth, dark wave, and electro-pop as an enjoyable effort that attains common ground between modern and classic sounds.

Matt Gilberto is a Cleveland, Ohio native and music enthusiast with a soft spot for alternative and punk rock. Life for him began in middle school when he first heard Nirvana’s In Utero. He enjoys writing, photography, concerts and spending time with friends and family.
RELATED ARTICLES
album reviewalbum reviewsfragrance
9.0