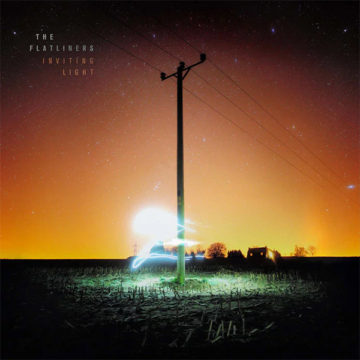 The Flatliners have been together for over 15 years, and their four man line-up has not changed in all those years.   Inviting Light is album number five.  Hailing from Brampton and Richmond Hill in Ontario, they have made a world wide name for themselves in the punk/hardcore/metal/alternative world of music.

These four guys (Chris Cresswell, vocals and guitar); Scott Bingham (guitar and vocals); Jon Darbey (bass and vocals) and Paul Ramirez on drums) have grown up with the 1990’s American punk sound and the Seattle Grunge movement.  It is very evident in their music.  Vocally, they borrow from Green Day and Soundgarden, and musically, pretty much the whole LA Punk scene.  At times early My Chemical Romance rears their head too.  Not bad reference points, but The Flatliners should develop into their own sound.

This is not a bad thing.  Fans of this genre of music will love this album.  Here the fans get 12 strongly performed, well produced songs.  The real issue is that, to my ears, they have a hard time finding their own sound, as they have on previous albums.  Songs such as “Indoors”and “Chameleon Skin”  excel as here you can hear this band coming into their own and comfortable with their sound.   “Chameleon Skin” adds much needed relief from their formula,  but it comes very late in the album.  “Dress me up in your chameleon skin,” Cresswell sings “I don’t want to remember who  I’ve been”.  Perhaps at this stage in the recording they realized that the band was more concerned about expectations instead of just putting together a solid album.  The guitar and backing vocals are damn near flawless.

They do try and breathe new life into some of the material (“Unconditional Love” is an example), but it does not sound complete, and at times the song veers off into a direction that takes away from the initial impact.  In other words, some of the songs do not live up to their potential.

It is obvious that this band is a tight unit, they function as one, and no one is trying to steal the spotlight.  And these guys know how to play, write strong melodies and turn a phrase (such as “Wedding Speech”).  But they need to shake up the formula.  All the great ‘punk’ bands figure this out at some point in their career (My Chemical Romance is an excellent example of band that matured into their own sound).  The Flatliners have the ability, and now they need to follow through, trust their instincts and follow their own sound..

Born and raised in Whitby, Aaron discovered music through his love of The Beatles. This led to a career in radio, writing for various publications, and ultimately a radio show about The Beatles (Beatles Universe), which ran for over four years. When not immersed in music, Aaron enjoys spending time with the loves of his life -- his wife Andrea, and daughters Emily and Linda (all of whom have an intense love of music too).
RELATED ARTICLES
album reviewsdine alone recordsinviting light
10