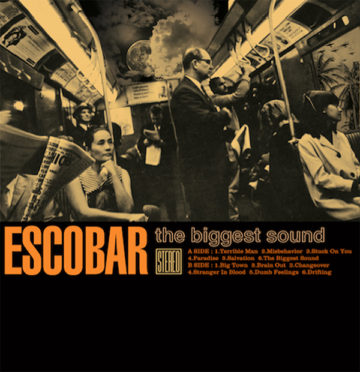 The Biggest Sound is the third LP from French rock and rollers Escobar. Coming off their widely-acclaimed sophomore release, Bird of Prey, the grunge-rockers take a page from the works of Nirvana and Queens of the Stone Age, yet struggle to begin a new page of their own.

The albums opener, ‘Terrible Man’ greets us with a wall of sound. Lead guitarist and singer, Remi Lucas belts his self-critique of being a “terrible man” while striking us with a surf-guitar riff while Charly Cailleaud’s rolling drums fill in the background. Gone is the lo-fi sound from previous releases thanks to some additional mixing and mastering. Follow ups, “Misbehaviour,” and “Paradise,” are two fast-paced, head-banging, snare-smacking jams reminiscent of their debut, エスコバル. Unfortunately, the ride begins to slow around the centre point of the album.

“Brain Out,” opens as a breather for the album. The percussion takes a break here, the fuzzy guitars lull in the background silently while Remi’s vocals take on an echo-filled centre stage. Anticipation builds over the course of the track leading you to think that the fuse they’ve set might soon explode into a climax of drums and fuzzy guitars. It ultimately fizzles out instead of delivering on what might have been the biggest surprise on the album. “Dumb Feelings” does this too after leading with a fantastic instrumental section before ending in a puddle of noise.

Escobar delivers longer tracks on this LP than on previous records. We’re talking about a band whose previous album, Birds of Prey, was almost entirely made up of tracks under two minutes. The additional track length ends up leaving some of these tracks feeling long-winded and repetitive. Escobar’s songwriting seems to be better suited for tighter cuts that tend to feel more dynamic. Chord-progression remains static throughout almost the entire track listing, “Stranger in Blood,” being one of the guiltiest and flatter songs on the album.

Escobar knows how to make fun grunge-rock. The proof is apparent in their discography, they’re capable of making catchy choruses and head-bopping guitar licks but are stuck creating odes to their favourite grunge bands of the mid to late 90s. “Stuck on You” is a testament to that as Remi speaks to replicating the actions of his favourite bands to attain success, “I use the same chords as you… I want to steal everything from you.” Escobar are at their best like on “Changeover” when they seem to be having the most fun.

The Biggest Sound yearns for more excitement and diversity within the track listing as the album suffers from sounding vaguely similar throughout. More time could have been put into developing nine strong tracks rather than stretching one concept over the course of twelve. The first half shows much promise but listeners will soon find themselves burnt out as they reach the latter half where tracks are almost indistinguishable from the last. Yes, Escobar’s The Biggest Sound is big on sound but not so big on creativity.

The Spill Magazine is a Toronto-based online publication dedicated to covering the independent music scene with a strong focus on our thriving hometown talent. Our writers bring you up-to-date news, in-depth features on musicians and reviews for the latest CD releases. We also travel to the front lines for all local festivals including Canadian Music Week and North by Northeast. Don’t forget to check out our Facebook and Twitter pages for all daily Spill updates.
RELATED ARTICLES
album reviewsescobarthe biggest sound
10