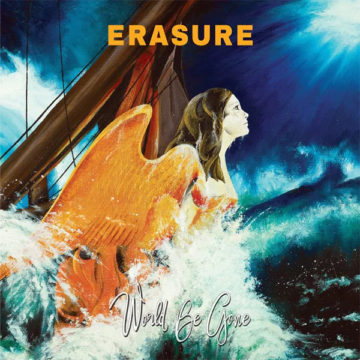 Longevity is rare and fleeting in the music industry.  Certainly musicians’ work can be appreciated much later in time and long-standing collaborations amongst artists is rare. Erasure, the British duo of Andy Bell and Vince Clarke, have continued their musical partnership from their first release of the 1985 single “Who Needs Love Like That”.  Back in the eighties, their work complimented the new wave dance scene, with Erasure giving us memorable pieces such as “A Little Respect” and “Victim of Love”.  Their catchy pop melodies and songs of love and love lost proved popular and if anything, a bit formulaic.

Now with their seventeenth release, World be Gone, three years since their last release, The Violet Flame, there are no real musical surprises here.  That is,  apart from Erasure’s lack of interest in getting us onto the dance floor this time around.   Bell’s vocals are strong as ever and Clarke’s compositions are approachable.

Unlike the past few studio albums which featured one or two strong dance tracks and then several unremarkable pieces, World Be Gone, contains a number of reflective melodic odes about the state of world affairs, such as on “Oh What a World” where Erasure warns us that “We will reap what we have sown”.  “Still Not Over” reminds all that although much has been gained with help and support for those affected by AIDS, there is still work to be done to bring true acceptance and respect for this community. In “Sweet Summer Loving”, singer Andy Bell remembers and gives tribute to his deceased partner.

Although we aren’t seeing a summer album filled with monster dance anthems, it is always good to see an old friend again, and we can appreciate the musical talent within.

Here's what we think...
Spill Rating
Fan Rating
Rate Here
New Criteria
10
97.4
7.0
Total Spill Rating
97.4
Total Fan Rating
5 ratings
You have rated this
Album Reviews
album reviewsbe careful what you wish forerasuremute recordsstill it's not overworld be gone
album reviews, be careful what you wish for, erasure, mute records, still it's not over, world be gone
About the Author
Patrick Li

An educator who also tries to introduce others to great music. It's a never ending job.
RELATED ARTICLES
album reviewserasuremute records
8.0