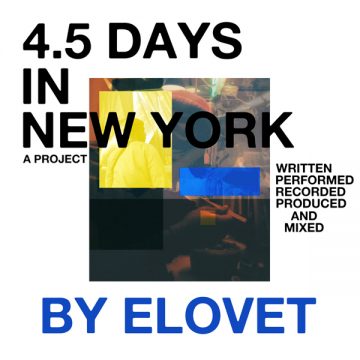 It is hard to put Elovet’s music into a category. While many categorize it as Hip Hop, I would argue that that does not do the music justice. It reminds me of the old joke — there are two kinds of music: good music and bad music. Elovet makes very good music.

4.5 Days In New York kicks off with a beautiful piano instrumental. “The Bnb” sets the scene for a trip that was planned with great ambition but did not end that way. It has a foreboding tone to it and it sets the ball rolling for Elovet’s lyrics of self-discovery, a failed relationship, and hopes for the future.

This song leads very nicely into “Rooftop Candy”, which is lo-fi trip hop, more than hip hop. An interesting choice for the lead single, but it does a nice job of mixing that beautiful piano with auto-corrected vocals and other sounds. It is quite good.

The rest of the E.P. follows along the same lines. For my money, the EP excels in the last two tracks, “Untitled Interlude” and “Interlude Untitled (Stalling)”, where he puts found sound to excellent use and allows the EP to stand out in the current music scene.

Elovet continues to experiment and surprise his listeners. 4.5 Days In New York could be his best work yet, and I sincerely hope he extends this into an album.

Born and raised in Whitby, Aaron discovered music through his love of The Beatles. This led to a career in radio, writing for various publications, and ultimately a radio show about The Beatles (Beatles Universe), which ran for over four years. When not immersed in music, Aaron enjoys spending time with the loves of his life -- his wife Andrea, and daughters Emily and Linda (all of whom have an intense love of music too).
RELATED ARTICLES
album reviewalbum reviewselovet
7.0