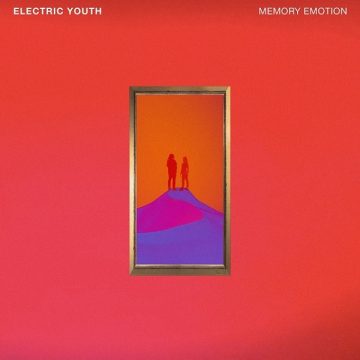 Lunchbox lovers Bronwyn Griffin and Austin Garrick of Electric Youth turned on a lava lamp for their latest album Memory Emotion. Having dated since eighth grade, with their breakthrough coming in 2011 when their song “A Real Hero” was heavily featured in the film Drive, Electric Youth are releasing their third LP since 2014’s Innerworld, a production that has been a long time in the making.

Poetic and groovy, Memory Emotion takes you through a journey of exiting the fast-paced world outside of your headphones and into a tranquil and centering atmosphere. This album showcases the amount of effort and love put into each track that empowers the appreciation of a growing plant. Tracks such as “Thirteen” really summarize the genre of synth-pop profoundly as they never stray away from their roots and don’t make it confusing to the listener.

However, taking off my space helmet, I did recognize the lingering silence between vocals in such as “The Life” that most likely won’t pair well with an eager individual waiting for the angelic voice to kick in. Is it possible that it is a little uncooked in terms of vocals for the length of the tracks? Yes, but the experience can still be emotional as certain sounds can trigger memories like an unwrapped present. So don’t judge this album by its cover so quickly.

Overall, the album truly should be viewed as a piece of art hanging in a museum. Someone at some point has to break the mould of ad nauseam and Memory Emotion looks to be just that for 2019.

Sadie Kromm is a journalist specializing in human interest and human rights located in Toronto, Ontario. Sadie’s digest includes recognizable names in the music industry and beyond including Buffy Sainte-Marie, Bif Naked, The Sheepdogs, The Trews, and many more. To her, it’s those behind the occupation that makes the story so fascinating.
RELATED ARTICLES
album reviewalbum reviewselectric youth
7.0