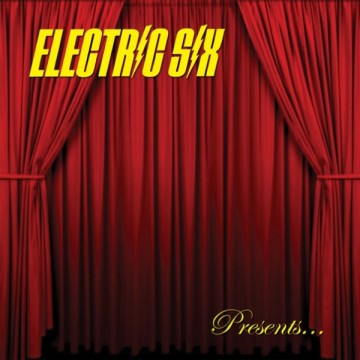 Electric Six summons clichés like Taylor Swift summons gal pals to participate in her latest video shoot. Frontman Dick Valentine might have been a carny in a past life; his colourful persona amplifies the band’s gauche-toting tendencies to the point that the audience wonders if we’re supposed to take the band’s retro bombast seriously or as a kind of novelty act that steadfastly rocks on (11 albums and counting) despite a distinct lack of commercial notoriety. Most would recognize the Detroit punk/new wave/industrial/glam/prog act from 2003’s “Danger! High Voltage” and “Gay Bar” – the only two Electric Six tracks to achieve a measure of public visibility. The band has always marched to its own arrogant, “cock-rock” guitar-driven rhythm. This makes perfect sense as the band’s lyrics often stray into moldy ‘80s-esque hair-metal misogyny – a segregated pleasure dome that naturally resists widespread admittance in this age of ultra PC modernity. Valentine’s voice should be treated as an instrument, the cadence and fist-pumping excess more important than the message (or lack thereof). But if you choose to give in to the idiocy and visceral pleasures on Bitch, Don’t Let Me Die!, their most cocksure record in years, Electric Six offers much, if only in intermittent fits and spurts, for the willing accomplice. “Drone Strikes” opens with pounding, persistent drums, and Valentine’s carnal, urgent voice. “Kids Are Evil” hoists millennial-fearing lyrics to the foreground with a softer side of Electric Six: acoustic guitar and a poppy melody. Here we’re again reminded why close attention comes at a price. “The Kids are evil / now they’re covered in dust / while staring at their Instagram.” As odd as it might sound, there’s just too much intelligible clarity here. Electric Six is best felt, rather than weighed or measured. The bassline on “Roulette!” recalls the flouncy, bouncy rollercoaster of “Gay Bar” again rendering the lyrics blissfully irrelevant. “Slow Motion Man” could have been a hit for Asia in 1984. Electric Six wants to be everywhere and potentially every band, but nowhere and nobody specific at any given moment. Bitch, Don’t Let Me Die! drifts all over the sonic spectrum, fusing synth, riffs and face-melting solos according to the band’s whimsy. The second half of the record wilts under these influences, becoming less purposeful and increasingly more parodying, maybe even self-parodying. “If U R Who U Say U R” is reminiscent of Tenacious D, but without the irony. It’s impossible to tell where earnest rock ends and the self-awareness begins. When the album concludes on the appropriately solipsistic track called “Electric Six” (“What’s my name? / Electric Six!”), the listener will not have achieved expanded consciousness or a greater understanding of mankind or inner peace. The listener will move on to something else, later to realize that some of these blasted, catchy tracks had crawled into the inner ear, like a Star Trek II brain bug, and nestled there, re-emerging later in maddening echoes of sophomoric rock and roll. In these days of monotonous self-importance, we need bands like Electric Six to remind us all to chill the fuck out. The band suggests this entire record is about mortality, but really it’s more about living while you’re alive.

James David Patrick has a B.A. in film studies from Emory University, an M.F.A in Creative Writing from the University of Southern Maine, and an honorary Ph.D. in bullshitting about everything else from the College of Two Pints. His fiction and non-fiction has appeared in PANK, Monkeybicycle, Squalorly, Specter Lit, and Bartleby Snopes among other wordy magazines. While he does not like to brag (much), he has interviewed Tom Hanks and is pretty sure you haven't. He bl-gs about music, movies, and nostalgia at thirtyhertzrumble.com and runs the James Bond Social Media Project at thejamesbondsocialmediaproject.com. James lives in Pittsburgh, PA.
RELATED ARTICLES
album reviewselectric six
8.0