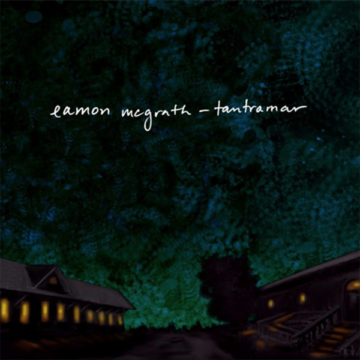 Tantramar is Eamon McGrath’s sixth studio album. In between albums he keeps himself busy with Julie and The Wrong Guys as well as other studio work. But it is on his solo albums where he is able to shine and demonstrate how truly talented he is.  Simply put, Tantramar is a brilliant album. It is a complicated, layered effort that is well worth the energy to discover the world which he has created on this powerful album. To say it is a dark, moody folk album sells it short. However, it has aspects of that as well as 1950’s film noir.

The album kicks off in fine style with the emotional and gut wrenching “Chlorine”. Emotional and beautifully played. McGrath’s vocals are heartfelt and painful at times. Reminiscing has never been this sad before. This sets the tone. Tantramar is not a happy or easy ride, more uneasy listening than easy listening. McGrath is confronting ghosts throughout and he is able to set the scene sonically as well as lyrically.

Throughout  the electric guitars are out in full force (for example “Never Enough”) and the album shifts to rock, again with stark lyrics and production. Tantramar moves across genres and they all fit, like perfect pieces to a puzzle, but it is more an abstract puzzle.

One thing is clear, this is a personal album for McGrath. The title, Tantramar, is an area in New Brunswick known as The Tantramar Marshes in the Bay of Fundy. McGrath recorded the album in Sackville, New Brunswick. The album looks back on simpler times and times that are not coming back. McGrath seems to be pausing in his life long enough to see what he has lost and not at all certain as to what lies ahead. “Just Kids”, for example, is a perfect song that shows McGrath telling his story. The backing music is perfect and it could have been done as a spoken word piece.

McGrath gets help from his friends, including Peter Dreimanis and Leah Fay of July Talk, Jose Contreras of By Divine Right, and Jaye R. Schwarzer of Cancer Bats and Julie and The Wrong Guys. McGrath’s production and arrangements are flawless and he knows what each song needs in terms of layering and sound. He never goes over the top, nor does he undersell the song.

Tantramar also gives McGrath a chance to move away from his more punk-rock based music. Less angry and less political, it gives him a chance to experiment with different genres and lyrics and the listener is richer for it. He is a remarkable talent and very eclectic in his styles and tastes. Tantramar is another side, which he periodically visits. It is a stunning album.