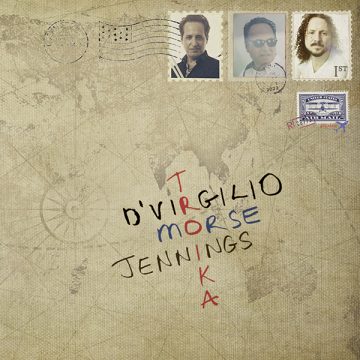 D’Virgilio, Morse & Jennings is a new band featuring some very seasoned musicians. Neal Morse brought the band together, which includes fellow Spock’s Beard and Big Big Train member Nick D’Virgilio on drums, and Ross Jennings who comes from a more heavy metal background with the band Haken on vocals and guitar.

This album is an interesting affair. Anyone who follows Morse will know that one never knows what to expect from him. Here, is summoning the spirit of Crosby, Stills & Nash. This is mellow, melodic, acoustic rock complete with the exquisite harmonies. The three musicians come together and to be honest, they sound like they have been playing together for years. For  D’Virgilio and Morse this is actually the case, but, as for the three of them, although they are new,  they play off each other perfectly. And who knew Jennings could be in an acoustic based, mellow band?

The album opens with the charming “Everything I Am”, complete with count in and a little studio chatter. It launches into a percussion-driven song that sets the stage for what is to come. What is key to the album is the outstanding harmonies. These three artists sound more cohesive throughout the entire album than CSN.

Although primarily acoustic, there is some fine guitar instrumentation throughout. “My Guardian” features a Harrison-style solo at the beginning and “Julia” features a blazing solo mixed in with the lovely vocals.  Then, just when you think you have this album figured out, they burst out with “Second Hand Sons”, which is perfect prog rock, albeit in short form, The organ is absolutely stunning, but again, it is that blistering guitar which lets everyone knows that this is very different from the rest.

Troika is the perfect album for these times. It is a meditative, well thought-out acoustic rock album. It isn’t folk, it is more mellow rock. D’Virgilio, Morse & Jennings have come up with a very strong debut. This album should be the summer soundtrack of 2022.

SPILL FEATURE: EVERYTHING I AM, EVERY MOMENT NEW – A CONVERSATION WITH NEAL MORSE (D’VIRGILIO, MORSE & JENNINGS)

Born and raised in Whitby, Aaron discovered music through his love of The Beatles. This led to a career in radio, writing for various publications, and ultimately a radio show about The Beatles (Beatles Universe), which ran for over four years. When not immersed in music, Aaron enjoys spending time with the loves of his life -- his wife Andrea, and daughters Emily and Linda (all of whom have an intense love of music too).
RELATED ARTICLES
album reviewalbum reviewsd'virgilio
9.0