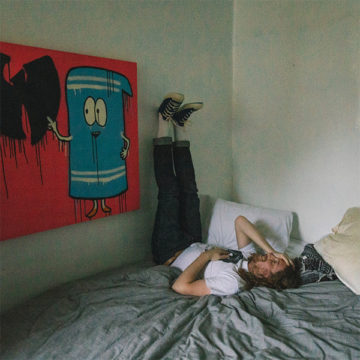 Dominic Angelella has done some seriously incredible work with the likes of Hop Along, Cold Fronts, MewithoutYou, and his most notable being with Lithuania. He has helped with countless popular artists including Kendrick Lamar, Tinashe, and Juicy J among others. But now, Angelella is out on his own with his second EP Road Movie. This album is pretty interesting.

Angelella brings a very guitar laden album that feels like it’s getting to the roots of Indie rock. With a sound similar to that of Neon Trees and Weezer, Angelella doesn’t really do anything too extraordinary, but the music has a passion behind it.

The album opens with “Photocopy of a Photocopy”. The song gets things started off right, it has a simple makeup with a fun pop feel. Perfect to introduce someone to a new album with. “One Day (I’m Going to Quit)” is a very bass guitar driven song. It is a little unique in that way, but it continues the upbeat pop and utilized more electronic synth on the song. “Red State” is easily the best song on the album. It has a catchy tune with lyrics to match. Angelella says he wrote it not long after having an odd experience in Russia while on tour with MewithoutYou. “Chicago” is nothing but a transitional song. It is slow and acoustic fingerpicked guitar. This just transfers everything to a more emotional feel. “Temporary Friend” is a more emotional song, but it still has the typical pop rock feel to it. It’s guitar driven and has the most powerful lyrics of the whole album. The song also carries the most complicated drum beat on the album.

Climb to the Garden” has a very emotional feel to it. It basically consists of an acoustic guitar, but is mainly vocally powered. This is also the first time we get a clean piano sound through the album. That just illustrates the diversity of musical talent Angelella has. ‘Rebecca’ is the closing song. It’s a love song that is again pretty simple. It’s got a pretty catchy sound and is one of the few songs where the vocals aren’t overpowered by the music

A common theme of the album has been that the mix feels a little off. The guitar is typically overpowered and drowns out the rest of the music on most songs. This may be attractive to some people, but it is kind of a turnoff for me.

The Spill Magazine is a Toronto-based online publication dedicated to covering the independent music scene with a strong focus on our thriving hometown talent. Our writers bring you up-to-date news, in-depth features on musicians and reviews for the latest CD releases. We also travel to the front lines for all local festivals including Canadian Music Week and North by Northeast. Don’t forget to check out our Facebook and Twitter pages for all daily Spill updates.
RELATED ARTICLES
album reviewslame-o records
8.0