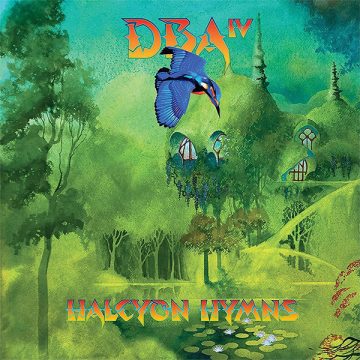 Geoff Downes was one half of the original Buggles and a member of Yes, while Chris Braide is best known for his work with Lana Del Rey, Paloma Faith, Marc Almond, and Beyoncé to name a few. Together, the duo have produced their own distinct prop rock/synth pop/pop music. Halcyon Hymns is their latest release.

The album kicks off the first single, “Love Among The Ruins”, which sets the stage and lets the listener know what they are in for. It is not a simple pop song, but rather a complex rock excursion. The song also benefits from narration from Barney Ashton-Bullock, while Dave Bainbridge contributes to flush out the strong melodies.

The album features strong ballads , so as the moving and beautiful “Warm Summer Sun”, which features Marc Almond dueting with Braide. The combination is moving and quite emotional. It has Pink Floyd overtones, but with Almond’s vocals the song becomes almost theatrical. It is not a contrast to the other songs, but the ballads and more heavy songs mix together to form a diverse and strong album.

Downes, besides providing incredible guitar, also turns his hand to keyboards. His piano work on “Hymn To Darkness”, combined with Braide’s layered vocals makes the song almost fragile, not as tough as other tracks on the album. But again, within the context of the album, it works.

It is refreshing in 2021 to hear an album that, in some ways, harkens back to the old days of a classic rock album. Ballads, guitar, strong vocals, melodies, they are all here.  Downes and Braide have delivered another winner. Halcyon Hymns will sit comfortably with other classic rock albums. The album will appeal to Yes fans as well as pop music fans.

Born and raised in Whitby, Aaron discovered music through his love of The Beatles. This led to a career in radio, writing for various publications, and ultimately a radio show about The Beatles (Beatles Universe), which ran for over four years. When not immersed in music, Aaron enjoys spending time with the loves of his life -- his wife Andrea, and daughters Emily and Linda (all of whom have an intense love of music too).
RELATED ARTICLES
album reviewalbum reviewscherry red
7.0