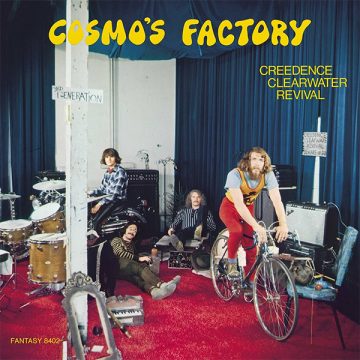 Originally released in 1970, Cosmo’s Factory was the fifth full-length album from Creedence Clearwater Revival in the two years since the band had been active under that name. Now, fifty years later, the album has been remastered as half speed – a process which makes for a fuller and balanced sound that smoothens our higher frequencies while boosting the low and mid-range – and proves to ultimately hold the test of time.

Perhaps best remembered for hits like “Lookin’ Out My Back Door”, “Travelin’ Band”, and “Up Around The Bend”, Cosmo’s Factor emits through the speakers hitting with a wave of nostalgia through its crisp textures. The album opens with the slick riff and full-bodied vocals of John Fogerty on “Ramble Tamble”, a track that, were it not for its length and slightly progressive shift in the time signature, should have been a hit. It is deep cuts like this and the cinematic and haunting blues of “Run Through The Jungle”–a track that very well is the strongest on the album–that truly bring Cosmo’s Factory to life beyond its contributions to Creedence Clearwater Revival’s greatest hits.

Furthermore, Cosmo’s Factory features four covers, each of which performed in an excellent manner that make the songs feel like they were in fact written for the band. Dick Penner’s “Ooby Dooby” demonstrates a classic pop influence from the ‘50s while Arthur Crudup’s “My Baby Left Me” and Bo Diddley’s “Before You Accuse Me (Take A Look At Your Self)” furthers their deep love of the blues; however, it is their cover of Marvin Gaye’s 1968 classic, “I Heard It Through The Grapevine” that steals the show. Clocking in at over 11 minutes, Creedence Clearwater Revival deliver a stirring and moody take on the classic that features multiple soulful guitar solos and makes for a stunning rendition.

Aside from their regular use in soundtracks–can a military chopper fly through Vietnam without “Fortunate Son” playing on a portable radio?–Creedence Clearwater Revival, despite their position as classic rock innovators and royalty, simply are not remembered as well as their contemporaries are in public memory. This can largely be attributed to their 1972 breakup with no subsequent reunion, yet their work remains timeless. Cosmo’s Factory is yet another reminder of this with CCR’s signature take on the blues, ‘50s rock, and ‘60s pop on full display in a sonic tone that remains distinct to the band and eternally classic.

A passion for music has always been a part of Gerrod’s life. As a young boy, he was raised on a steady diet of the music from The Chili Peppers, Aerosmith, The Stones, Prince, and others from his mum. Raised in the GTA, Gerrod continued to foster his love for music by attending a wide range of concerts and learning the drums. His unapologetic passion for music has no bounds and has spread to a wide variety of styles, whether it be the 90’s rock that sound tracked his teenage years, the jazz he studied in university, or his newfound love for hip-hop. He recently received his bachelors in music and education from York University and is passionate about writing and reviewing good (and less than good) music. Gerrod is also the drummer and songwriter for a Toronto based rock & roll band, One In The Chamber.
RELATED ARTICLES
album reviewalbum reviewsccr
9.0