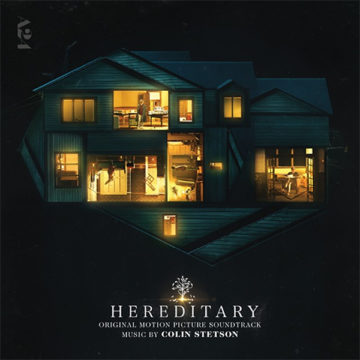 Scoring a film is a difficult task, and quite frankly there are not a lot of artists who can compose and arrange music for a film. Writing for a horror film is an even more distinct skill. It is easy for one to go over the top with ‘scary music’ and ruin the tone of the scene. Colin Stetson has composed and performed the perfect soundtrack for a horror film with his score for Hereditary. The film is creepy, suspenseful and downright scary at moments, and a lot those scares in the film  can be attributed to Stetson. Having seen the film, the soundtrack brought me right back to the theatre and the discomfort I felt for over two hours.

Stetson is a very talented and well respected musician/artist who has played with Bon Iver, Arcade Fire, Tom Waits, David Gilmour, Timber Timbre, Sarah Neufeld, Animal Collective and BADBADNOTGOOD to name a few. Besides releasing nine studio albums he has scored over 20 movies and television shows.

It is difficult to listen to this album without visualizing the film. However, what is interesting is that the music does create an atmosphere on its own. For this music Stetson uses electronic music, industrial, choirs, ambient, and many other genres.

There are 23 tracks on the album, and the titles represent the scene with which they are related in the film (e.g., “Chasing Peter”, “Book Burning”, “Second Seance Pt. 1”) and the titles are perfect. If you have not seen the film, no matter, this album does work on its own. It is demanding instrumental music.

This is a unique trick because the music does not distract from the film, however, when you are listening to the album Stetson demands your full attention. Again, quite an achievement for an instrumental album. But Stetson pulls it off with his writing and producing. He knows where to take the melody, he understands musical  arrangement so that he not only sets a mood but lets it play out.

Stetson is a remarkably talented artist. He was a perfect choice for the soundtrack of this disturbing, yet beautifully filmed horror film. His jazz background is felt more than heard throughout the album. The artists working with him on this album include Tim Hecker, Ben

Frost, Evan Parker and Mats Gustafsson. Stetson is no stranger to soundtracks (12 Years a Slave, The War Show to name just two ) nor is he a stranger to avant garde. For this album he combines the two worlds successfully to create a disturbing, unique and overall wonderful listening experience.

Born and raised in Whitby, Aaron discovered music through his love of The Beatles. This led to a career in radio, writing for various publications, and ultimately a radio show about The Beatles (Beatles Universe), which ran for over four years. When not immersed in music, Aaron enjoys spending time with the loves of his life -- his wife Andrea, and daughters Emily and Linda (all of whom have an intense love of music too).
RELATED ARTICLES
album reviewalbum reviewscolin stetson
8.0