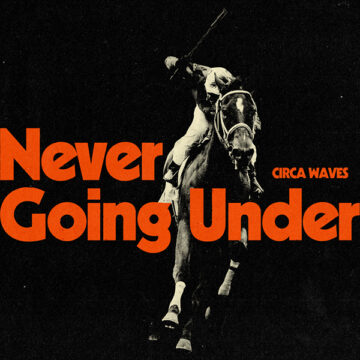 With their sixth upcoming album Never Going Under, the English band Circa Waves achieve a euphoric alternative record at its best. Musically speaking, the eleven tracks have the presence of traditional rock instruments, with a soft touch of electronic beats. In terms of lyrics, each tune is connected to one another, leading to what seems to be a personal story.

“Never Going Under” welcomes the audience with a steady and vibrant pace, accompanied by a guitar riff that works as an intense bridge, suiting the music well. “Hell On Earth” mixes experimental and danceable sounds, evoking a The Strokes kind of melody. However, “Northern Town” and “Want It All Day”, are two of the slow ballads of the record that include soft guitars and lower vocal pitches. Finally, “Living in the Grey” gives an emotional high point closure to the album.

Overall, most of the songs follow a rhythmic structure with sparkling openings and abrupt endings. Additionally, there is a balance between indie, pop/rock, and alternative rock throughout all the tunes, making it enjoyable. For people that like the new alternative scene, this album is worth listening to.

As a Mexican journalist student, I focus my work on arts and music. Through my writings, I expect people to get closer to new artists and experiences.
RELATED ARTICLES
album reviewalbum reviewscarry you home
8.0