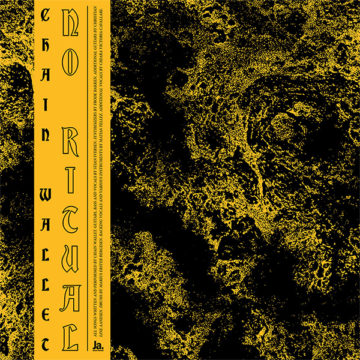 With the release of its second album, Bergen-based dream pop trio Chain Wallet delivers a post-apocalyptic dive into the millennial mind. While the group’s self-titled debut from 2016 used the attempt to become untethered from the past as its thematic basis, No Ritual deals with being stuck in the present, and the feeling of psychological stagnation that currently plagues a large proportion of this generation.

No Ritual was conceived in a cabin on a remote beach in the southwest of Norway. Fittingly, the opener, “Lost Somewhere”, feels like the soundtrack to an escape, a drive to the beach with the top down. “Final Testament” offers a jangly melancholy that would make Johnny Marr proud, while additional vocals from Chiara Cavallari of the band FOAMMM punctuate the album and add a hazy sweetness to the overall wall of sound. At the mid-point of No Ritual comes “Liminality” which, as the title suggests, hints at a transition to a different sonic direction, but the following songs continue on the same path as the first half.

The album doesn’t feel post-apocalyptic so much as intergalactic at times, with its textural sound giving the impression of rocket-speed movement toward something greater. Although the band is still finding its own sound, it struggles to break away from its apparent influences. While this isn’t necessarily a bad thing, it does hinder the album from being as memorable as it might have been.

Kirsten Inneski was born and raised in Scotland but fled to Canada in 2016, settling in Toronto in order to have the opportunity to see bands who rarely, if ever, make it to the UK. If her mum asks, however, the official party line is "Kirsten moved 3000 miles away from everybody she knows and loves for the totally rational reason of pursuing career in her field of TV production". Inneski writes, daydreams about making music videos she will never have the budget for* and obsesses over music and comedy, all while trying to make pals with everybody.*Eccentric billionaires can hit her up on Instagram.
RELATED ARTICLES
album reviewalbum reviewschain wallet
8.0