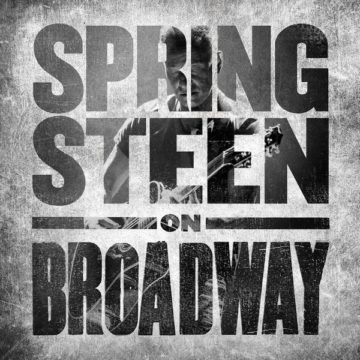 Paired with the release of his Netflix special, Bruce Springsteen has brought his highly acclaimed Broadway show to a recorded format. Featuring the songs and stories from Tony Award winner Bruce Springsteen’s historic 236-show run at Jujamcyn’s Walter Kerr Theatre, Springsteen On Broadway is a massive, thirty-track live album which perfectly encapsulates the heart, soul, and intimacy created through his solo Broadway performances, making this a strong, last minute contender for the greatest albums released this year.

Of the thirty tracks across Springsteen On Broadway, nearly each song is paired with a spoken introduction which walks the audience, and now the listener, through Springsteen’s life. If you read his thrilling memoir, 2016’s Born To Run, then many of these stories, while familiar, will be brought to life through the voice, charm, and charisma of the man himself. Through these introductions, he brings a sense of humor, bravado, integrity, and vulnerability which are undeniably that of Springsteen. For the lifelong Springsteen fan who has followed him through all his creative ventures, this creates a truly immersive and perhaps even an unparalleled experience that truly brings his Broadway performance to your home speakers.

For those who are simply here for the music, Springsteen On Broadway continues to deliver as The Boss goes through a series of hits -“My Hometown”, “Thunder Road”, “Born In The U.S.A.”, and “Dancing In The Dark”, among others, along with deeper cuts – “The Rising”, “My Father’s House”, “Tougher Than The Rest”, to name a few – in a stripped-down fashion. Not only does this add to the intimacy of the overall performance, but it allows for his spoken narratives to seamlessly continue through his gruff voice which seems to add yet another dimension to his already prolific discography. I especially enjoyed his haunting performance of “The Ghost Of Tom Joad”, the unexpected “Tenth Avenue Freeze Out” – likely my favourite Springsteen track – and the climactic closing tack, “Born To Run”.

When paired with the exceptional concert film now streaming on Netflix, Springsteen On Broadway is an excellent addition to Springsteen’s discography which drastically contrasts from his ever-growing list of live releases. Furthermore, while plenty of talented performers and songwriters have released acoustic live albums, Springsteen On Broadway stands apart from each and every one of them as Springsteen flawlessly blends his body of work with the tradition of Broadway in a manner which the casual and diehard fans can both marvel at.

A passion for music has always been a part of Gerrod’s life. As a young boy, he was raised on a steady diet of the music from The Chili Peppers, Aerosmith, The Stones, Prince, and others from his mum. Raised in the GTA, Gerrod continued to foster his love for music by attending a wide range of concerts and learning the drums. His unapologetic passion for music has no bounds and has spread to a wide variety of styles, whether it be the 90’s rock that sound tracked his teenage years, the jazz he studied in university, or his newfound love for hip-hop. He recently received his bachelors in music and education from York University and is passionate about writing and reviewing good (and less than good) music. Gerrod is also the drummer and songwriter for a Toronto based rock & roll band, One In The Chamber.
RELATED ARTICLES
album reviewalbum reviewsbruce springsteen
9.0