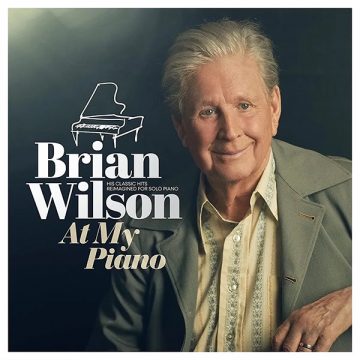 How should you consider an all-instrumental piano album of the songwriting genius that is Brian Wilson, best known for coming up with probably the best vocal harmonies in modern music as a member of The Beach Boys?

That could actually be quite an intriguing task for many listeners, but also for the composer himself, as At My Piano is exactly what the title says, Brian Wilson alone with his piano, playing some of his best songs. As we know, there are too many to fit on one album.

The fact is that the stumbling block could be that many listeners and critics might expect Wilson to reinterpret, add, or subtract elements from the songs here. Yet, Wilson takes the ‘playing’ approach, for seemingly quite a clear purpose. He actually shows the actual compositional structure, the intricacy of his songwriting and melody structures that served as the backbone for those incredible vocal harmonies.

And it actually works more or less perfectly. From the melancholy-driven “In My Room”, one of his early masterpieces, to the unbelievable structure of “Surf’s Up” and “Good Vibrations,” showing why the latter is one of the best pop/rock songs around.

That this might actually be the idea behind the approach here is probably shown by “Sketches of Smile”, where Wilson uses bits and pieces of his intended album masterpiece album Smile and presents them as they actually are – bits and pieces. Genial bits and pieces.

Quite a revealing and essential musical experience, even for just casual fans.

Formerly a lot of things, including a journalist and a translator, currently a freelance writer living in The Netherlands.
RELATED ARTICLES
album reviewalbum reviewsbrian wilson
9.0