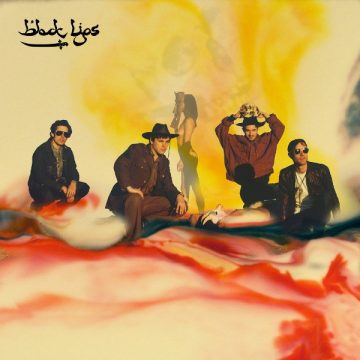 The self-proclaimed ‘Flower Punks’ are back with Arabia Mountain, their seventh album, and first since 2009’s 200 Million Thousand. The Black Lips bring a lot more flower than punk to this record, opting for a much cleaner sound than we just heard from 200 Million Thousand – or from anything they’ve ever done, for that matter.

The guitars are cleaned up, and the vocals are where most bands put them – front and center. Long-standing Lips fans might not like the idea of any of this, but Arabia Mountain works. And it works from cover to cover, something that can’t be said of all the band’s records. To blame for all of this? Producer Mark Ronson (Amy Winehouse, Jay-Z). Ronson’s taken this opportunity to give your speakers a bit of a break, and The Black Lips come through loud and clear.

Arabia Mountain opens with “Family Tree,” a track that’s still full of distortion and screaming backups (and are those harmonies and brass we’re hearing? You bet it is). “Bicentennial Man” features a little Surf guitar that could have been lifted right out of a ‘60s Ventures record. There’s even an homage to Spider-Man in the form of “Spidey’s Revenge.” It’s hard to imagine The Black Lips ever becoming radio-friendly – but if they keep up the clean work, it could happen.