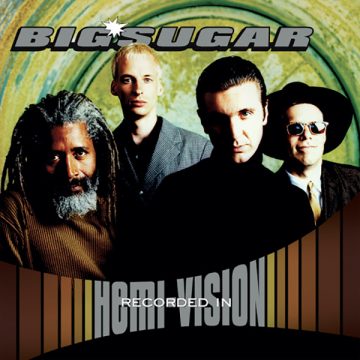 A quarter of a century on from its original release, the platinum-selling Hemi-Vision gets the big “deluxe” treatment. This reissue comes complete with newly-released lost takes, acoustic versions of songs and dub mixes, with six previously unreleased numbers alongside the more familiar fare, including a playful cover of The Beatles’ “Baby’s In Black”.

The presentation is indeed lavish. There are rare photos, memorabilia and extensive liner notes by bandleader Gordie Johnson, putting into context the backstory of the set – including the onstage death of drummer Walter “Crash” Morgan. The music itself is available on vinyl in bright green and orange albums, on two CDs, and on digital and streaming services.

And it’s the music that matters, as they say, and that’s a mix of blues rock and less frequently traditional reggae, sometimes within the same song (try “Joe Louis Judgement Day”, with its wonderful dub section driven along by Garry Lowe’s deep, deep bass), alongside other roots elements. “Empty Head” even has a bit of ‘90s Britpop to the vocals too–Oasis play the blues?–whilst “Rolling Pin” has echoes of Led Zeppelin.

That’s not blues rock in the sense of 20 minute long guitar solos, by the way. This music has a punky, spikey, slightly grungy energy, and very occasionally a dash of psychedelia. Roots credibility comes from a track like “Tommy Johnson”, drawing on the Mississippi Delta tradition for its lyrics if not its actual musical accompaniment. Tommy Johnson might not be as well-known as Robert Johnson, but I still don’t think the blues purists are going to be listening anyway, it’s not that kind of album. Then again, there is some wailing blues harmonica by Kelly Hoppe in places, and the slide guitar driven “Tired All The Time” sounds almost like a Delta field recording.

The six bonus tracks are totally fascinating, of course. The original set has been reissued before, but this is now the one to get.

Norman Darwen grew up in north-west England admiring Elvis’ gold lamé jacket, Lord Kitchener’s way with words, and his much older brother’s and sister’s dancing to The Rolling Stones’ ‘Little Red Rooster’ on the telly. He’d wind aforementioned brother up by reading the entire contents of an R’n’B magazine he used to have to collect from his local shop for him and then reciting back as much as he could remember. Some years later he’d wind up his own friends by telling them who these people were that Led Zeppelin etc were covering – Willie Dixon, Howling Wolf, Otis Rush etc. These days he still listens to the blues, but has added a taste for reggae, zouk, rap, folk and anything else that takes his fancy…
RELATED ARTICLES
album reviewalbum reviewsbig sugar
8.0