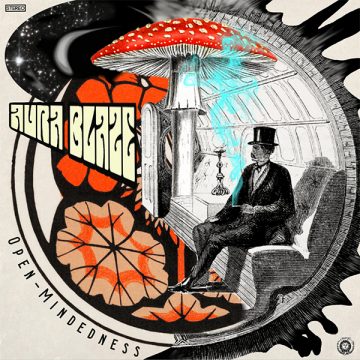 There is a trend these days for solo artists working under a band guise to create their music based on the ‘everything, including a kitchen sink.’ Of course, more often than not that concept backfires where usually you can use that quote from Milos Forman’s film Amadeus with the king, through Salieri’s suggestion dismisses Mozart’s music as having “too many notes.”

Rhode Rachel, who operates under the moniker of Aura Blaze on his latest EP Open Mindedness, has not only everything that is connected with psychedelia and power pop in there, but at least two kitchen sinks. All that in exactly three songs.

You may throw that ‘too many notes’ line at this EP, but it all works. From the ELO channeled through Tame Impala that includes The Beach Boys harmonies bonus of the title track, through to the XTC guising as Dukes of Stratosphear of “Summer Solstice”, to the cover of “The Only One I Know,” certainly the best song The Charlatans ever came up with, just bringing that 60s sound to current times.

Add to all that Rhachel had to go through the recording process over again, as the original recordings were lost on a crashed hard disc and you get a quick, sharp and rich (as in a rich slice of cake) set of three songs that constantly beg to be played over.