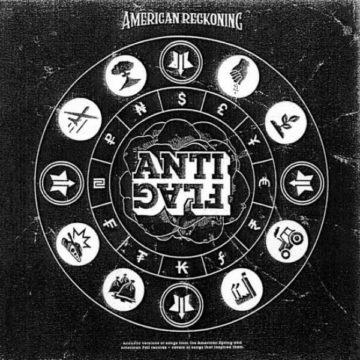 Anti-Flag have spent the last several years reflecting on the state of American politics and the moral values that underlie the country’s society itself. While 2015’s American Spring saw the band focus on an upbeat rousing of the strengths and values of the American people in the face of growing inequality and social division. Following the political turmoil of the previous year, 2017 release American Fall saw the band angry and defiant in the face of what they saw as a further corruption of the spirit they sought to evoke in their previous album. Recently released American Reckoning completes this creative cycle with a more reflective attitude.

While the first two albums in this thematic sequence contained original tracks with a sound much familiar to followers of the old time punk rockers, American Reckoning is composed of a series of reworked acoustic versions of tracks from the previous two albums closed off by three covers. Rather than saying anything new, the band attempts to strip back the distortion and expose the lyrical and conceptual meaning that has been so essential to their work the last several years. While this might not offer the same sound that their fans would be accustomed to, it’s a mature effort that looks to complete their previous work as opposed to doing something new for the sake of doing so.

The acoustic tracks show off an often-overlooked musicianship possessed by the band. While acoustic covers have a tendency to sound somewhat homogenous, Anti-Flag has escaped such pitfalls with clever arrangements that add melody in the space left behind by the absent distortion. Going even further, the band added subtle textures to tracks like “Brandenburg Gate” that create an expansive atmosphere typically unheard of on punk rock albums. The result is a set of seven songs that stand out much more on their own than they did on their original releases. Along with an increased presence of backing tracks for the vocals, the lyrics become the point of emphasis of the compositions rather than an afterthought.

What we’re left with is a sharp rebuke of the movement of American society towards corruption, individualism and division that can easily be sung along to. Though the acoustic covers are a welcome addition to American Fall and American Spring, they don’t hide the often cliched melodic progressions and sound of the original versions that weakened those records in the first place.

The album is back-ended by a trio of covers that lyrically complement the rest of the record. While the distortion heavy renditions of Buffalo Springfield’s “For What It’s Worth” and John Lennon’s “Gimme Some Truth” give new life to those songs, Cheap Trick’s “Surrender’ sounds like little more than a modern remaster. When after all is said and done, Anti Flag have produced a mature and coherent conclusion that fuels the fire of the band’s self-expression across the album cycle as a whole.

Based in Montreal but raised across Western Europe, Andrew feels at home both everywhere and nowhere. Having picked up the piano at age four, he has since gone on to add clarinet, saxophone and guitar to his musical arsenal. As well as crafting music, Andrew spends a lot of time listening both at home and in live contexts. Rather than focusing on a particular style or calibre of artist, he is keen to explore music of any shape or size. Outside music, Andrew's passions lie in philosophical writing, visual art and sharing positivity with the world around him.
RELATED ARTICLES
album reviewalbum reviewsamerican reckoning
9.0