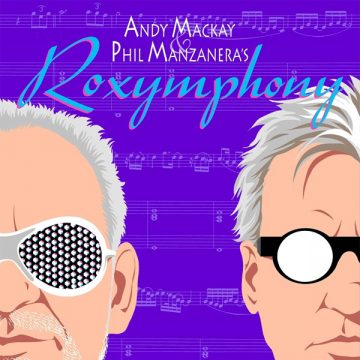 In 2019, Andy MacKay composed and released an album, 3Psalms, and performed the stunning work live, with part of the show a MacKay and Phil Manzanera collaboration titled Roxymphony. Mackay had come up with the idea of performing Roxy Music songs with an orchestra, choir, and standard rock instruments. Together they transformed classic Roxy Music songs. The result is simply beautiful and breathtaking. This album is a souvenir of those shows.

This is a beautifully put together package and can stand comfortably beside any other previous solo works or Roxy Music catalog. Dipping into the Roxy Music songs, MacKay and Manzanera pick some obvious ones (“More Than This”, “Song For Europe”) but they also picked songs that one would not expect to be given this treatment, such as “Love Is The Drug” and “In Every Dreamhome A Heartache”. Yes they are both hits, but one would not necessarily think they would lend themselves to this treatment, and yet they work.

The album opens with “Song For Europe”, which quietly grows as the Owl Parliament Choir comes in “I remember, all those moments”.  It is full of  melancholy and the best way to start the programme. The listener is set for a trip into the past. It is the perfect introduction to the album, featuring lead vocals from Harry Day Lewis. He deserves a great deal of credit for his spot on vocal solos throughout Roxymphony. He makes the songs his own.

MacKay and Manzanera have transformed classic Roxy Music songs into something brand new. The songs have new life and are not so much cover versions, but brand new work from the two. MacKay and Manzanera have played together constantly since Roxy Music. They have played on each other’s solo works and they instinctively know and understand each other.

Some of the playing on this project is their best ever. Listen to Manzanera’s blistering guitar solo on “In Every Dreamhome A Heartache”, or MacKay’s solo on “More Than This”. It moves one to tears.

The addition of the DVD is brilliant. It is  well filmed, beautifully edited and it sounds fantastic. The bonus tracks are very welcome and as a film it keeps one glued to the screen.

Art rock meets orchestra, and with Roxymphony MacKay and Manzanera have created one of their best ever albums.

Born and raised in Whitby, Aaron discovered music through his love of The Beatles. This led to a career in radio, writing for various publications, and ultimately a radio show about The Beatles (Beatles Universe), which ran for over four years. When not immersed in music, Aaron enjoys spending time with the loves of his life -- his wife Andrea, and daughters Emily and Linda (all of whom have an intense love of music too).
RELATED ARTICLES
album reviewalbum reviewsandy mackay
8.0