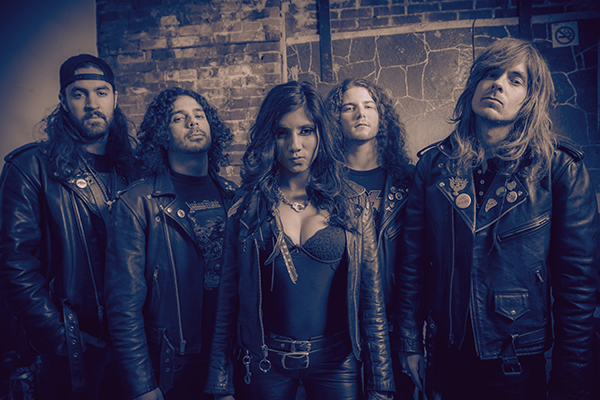 With a brand new album under their wings, Diemonds has been pounding the pavement across Canada for a while now. Never Wanna Die was released in Canada on August 14 on Underground Operations, and what better place to celebrate its release than Hard Luck Bar in their hometown of Toronto.

The band has had their share of tragedy in the past few years, suffering the death of three band members. But, tough as diamonds they are, and are back just as strong with a new lineup, tighter and tougher than ever. Don’t let that toughness fool you, though; they are clearly appreciative, and approachable – the band was out mingling with friends and fans alike on the sidewalk before the show.

Diemonds came onstage promptly and opened the set with “Over It,” breaking Mach 1 and raising the ambient temperature a good 10 degrees. A tight group of fans gathered near the front of the stage, and the room was filled to the back. The crowd was a mix of 20-somethings, all the way to 50-somethings, all primed and ready to rock and roll. The band has no qualms about being referred to as an ‘80s throwback band, from their visual appeal of torn denim and long hair, to the fuzzy guitar riffs that dominate every one of their songs. Yet frontwoman Priya Panda also adds her own twist of elegance to the mix. Her voice is reminiscent of hair bands diva Darby Mills (The Headpins) and Holly Woods (Toronto), but with a finely serrated edge that clearly sets her a cut above. On the other hand, there is nothing throwback about their raunchy vocabulary that clearly has a modern day twist, and their audience doesn’t mind a bit. Onstage, the limelight between numbers is shared between Panda and other band mates who banter back and forth with the audience. The band blasted through an even mix of numbers from their new album, as well as their previous two recordings, and also covered two numbers by Kill Cheerleader. Onstage they give off the energy level of a blast furnace, no holds barred.

By the end of the night, it was clear the audience was spent, and everyone left with a smile on their faces. They came to rock and roll . . . and rock and roll they did. If you missed it, Toronto, relax, they’ll be back soon. Don’t say I didn’t warn you though.

Trish Melanson lives in the Toronto area with her three boys, Nicholas, Justin, and Eric, her dog Jakkson, and her cats Max and Jagger. She is the former host and producer of Canadian Kickass, a weekly two hour radio show on New Jersey's Chestnut Radio, showcasing Canadian Music. She is also a former Web Content Manager of Indie Soundscapes, an online showcase for Independent Music Artists Worldwide, and was a regular music contributor to The Stroumboulopouli. She is a fervent supporter of the Toronto live music scene. In a past life she was a teacher and Vice Principal in Durham Region. She has many more new and exciting projects waiting in the wings. ;)
RELATED ARTICLES
diemondslive reviewsthe hard luck bar