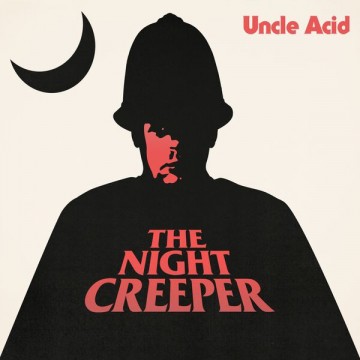 Uncle Acid & The Deadbeats
The Night Creeper
Rise Above Records

With Uncle Acid’s 4th full length release set to disturb the masses, Night Creeper assaults your psyche with doom and fury, peaks and valleys and bloody undertones that will lead to your inevitable demise. Opening the show is a crushing track titled “Waiting For Blood”, a mid-tempo anthem that grooves with unsettling riffs and a vocal take that will burn a place in your soul and haunt you when you least expect it. Halfway through the song, we get a guitar solo that is truly mesmerizing and book-ended with vintage Randy Rhodes style runs, something I wasn’t aware was in Uncle Acid’s bag of tricks.

As we move through the tracks, the third offering titled “Downtown” really stands out from the pack; it’s a track that paints a vivid picture of a Jack The Ripper type character, the most famous night creeper of all. The track fully embodies the word doom; it has freighting riffs that will convince you there is NO way out of the story for the antagonists. Lyrics such as ‘so many losers in dark alley dives, so many lovers in violent romance, so many others with no chance’ certainly makes you hope this night creeper won’t be paying you a visit anytime soon.

The undisputed winner for the catchiest riff comes on the sixth track titled “Melody Lane”, this song is incredible in all aspects, the main riff is an ascending doomy arrangement that is mirrored by the vocals when the verse kicks in. “Melody Lane” simply resonates in your head for days after it’s first listen.

As we reach the last two songs of the album we get “Slow Death” which is certainly a highlight, it has hints of the Doors’ stoner hit “Riders On The Storm” with sounds of heavy rain in the background and unsettling lyrics. This song is the start of the journey’s end of the victim’s life. The final chapter is a hidden track called “Black Motorcade” which is an extension of “Slow Death” as it too has the stormy backdrop and holds then ambient doom feel until it’s lights out.

For fans of Uncle Acid, this album is a must and for others looking for the next great thing in doom metal, this is it.

Andre has been writing for The Spill Magazine for over 12 years, dating back to the print days. His passion for music goes far beyond writing reviews for new music and live concerts, he is also an active musician and producer on the Canadian music scene. Having toured North America and Europe with various acts, he is no stranger to dedication and work ethic new bands must endure to make the grade in today's market; Andre always delivers perspective writing that is authentic and to the point. Mr. Skinner typically covers indie rock, grass roots, electronica and is our resident hard rock and heavy metal specialist. He is extremely selective on what bands he covers for articles and you can rest assured they are ALWAYS band to watch with something left of centre to offer.
RELATED ARTICLES
album reviewsuncle acid & the deadbeats
8.0