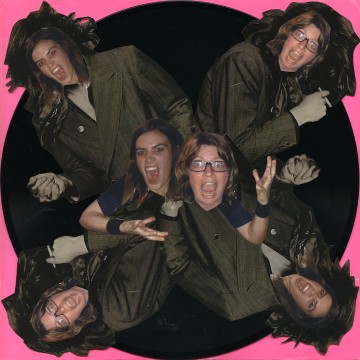 Well, the Pack is back. This time Vancouver’s rock duo, The Pack A.D., have released a four track EP, which follows closely on the heels of last year’s Do Not Engage. The album contains a re-release of Do Not Engage‘s “Animal”, as well as three previously unreleased tracks. It also coincides with the release of “Animal”’s official video. The video features guitarist/singer Becky Black escaping from a research facility and being pursued by a crew of mad scientists, who eventually end up performing some “Thriller” dance moves. The video was filmed in their Vancouver, and was directed by long time friend and collaborator Jimi Cuell.

“Motorvate”, a Pack A.D. live show staple, is a hard ass fuzz track about life in the dying city of Detroit. “Concrete swimming pools, Let’s hang out, Abandoned houses, Make good hideouts”. Up next is “Back In A Hole”, a tale of a self loathing reminiscent of Do Not Engage‘s “Loser”. “If I said something nice, I’m sure it’d kill me deep inside, Back in a hole where I belong”. The fourth and final track of the EP, “Nightcrawler”, is a The Oh Sees cover, included as both Black and Miller, are huge fans, and because it is a song which they are both able to sing.

Once again The Pack A.D. have put together just enough of a sampling of new music to keep us wanting more. Just the perfect mix of their brand of badass rock and roll, and haunting electric ballads, that is sure to satisfy the Meta animal in you.

Trish Melanson lives in the Toronto area with her three boys, Nicholas, Justin, and Eric, her dog Jakkson, and her cats Max and Jagger. She is the former host and producer of Canadian Kickass, a weekly two hour radio show on New Jersey's Chestnut Radio, showcasing Canadian Music. She is also a former Web Content Manager of Indie Soundscapes, an online showcase for Independent Music Artists Worldwide, and was a regular music contributor to The Stroumboulopouli. She is a fervent supporter of the Toronto live music scene. In a past life she was a teacher and Vice Principal in Durham Region. She has many more new and exciting projects waiting in the wings. ;)
RELATED ARTICLES
album reviewsthe pack a.d.
8.0