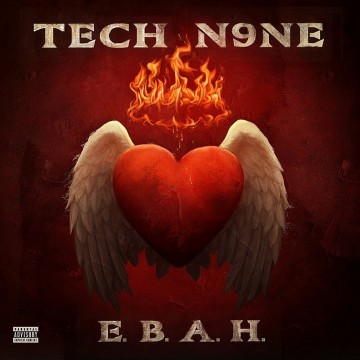 Tech N9ne is far from today’s Rap and Hip-Hop scene, not rapping about ‘big booty hoes,’ ‘birthday cake’ or trendy cars. E.B.A.H. (Evil Brain and Angel Heart) is Tech N9ne’s fourth album featuring seven songs and three skits for a total running time of 27:09 minutes. Since three of the tracks, (“E.B.A.H.,” “Don’t Tweet This,” and “Earregular”) were released prior to the album dropping, there were only four new tracks for the duo’s loyal audience. The problem with this is that the new four songs do not compare to the already released songs from the EP, except for “Rock Yo Head,” another highlight track from the record.

Imagine going on a half hour drive with that friend you can always let loose with, this is the album for that. The first four songs of the album are heavier and aggressive in comparison to the three tracks proceeding. The last three tracks after the “New Message” skit are softer and more compassionate. Perhaps it’s a split between E.B.A.H. Like everything Tech N9ne releases, the album is enjoyable and different from most music being produced today. The album artwork is my favourite part, the heart with wings on the cover with a flaming halo to show the contradictory and confliction of “Evil Brain, Angel Heart.”

The Spill Magazine is a Toronto-based online publication dedicated to covering the independent music scene with a strong focus on our thriving hometown talent. Our writers bring you up-to-date news, in-depth features on musicians and reviews for the latest CD releases. We also travel to the front lines for all local festivals including Canadian Music Week and North by Northeast. Don’t forget to check out our Facebook and Twitter pages for all daily Spill updates.
RELATED ARTICLES
album reviewstech n9ne
8.0