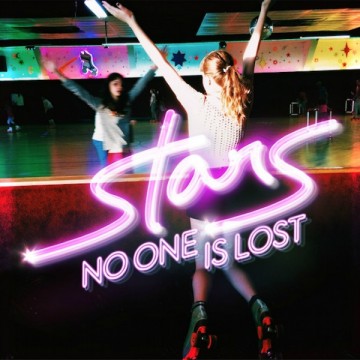 Stars
No One Is Lost
ATO

The Montreal-based quintet Stars return two years after their album The North with a simpler, tighter, and mostly upbeat collection of music with their latest entry No One is Lost.

The opening selection “From the Night” is a tribute to the Royal Phoenix, a nightclub where the band had recorded above. It’s a fun, danceable selection that prepares you for a great night on the town – full of promise and unpredictability. The atmosphere conveyed on this track is in great contrast with perhaps one of the strongest tracks, the Country-tinged ballad “Look Away”. One can interpret the lyrics of “Look Away” as a question of how to reconcile a secret relationship forged from a hazy, liquor-fueled crazy night out many years ago. It’s a mature, melancholy, meaningful piece that distinguishes itself from the New Order influenced “Are You Okay” or “No One Is Lost”, the latter which would sound at home alongside a Black-Eyed Peas track.

Many have commented that No One is Lost, is series of danceable pop songs but the slower pieces such as “Turn It Up” and “The Stranger” demonstrate the band’s adept ability to melodically express feelings of regret and self-pity.

No One is Lost reminds us of the great parties we once attended and then wonder what would have happened if fate had treated us differently while we were out.

An educator who also tries to introduce others to great music. It's a never ending job.
RELATED ARTICLES
album reviewsstars
8.0