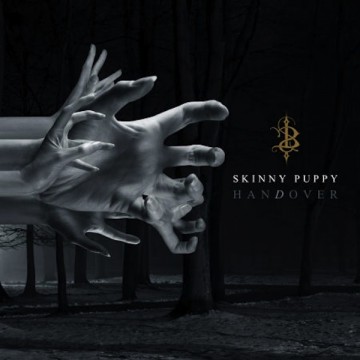 Handover is the third release since cEvin Key and Nivek Ogre reformed industrial icons Skinny Puppy in 2000. The three years it took to make the album were plagued with hurdles, including the insolvency and turmoil with their label, SPV. Along the way, both worked on their various side projects, including three releases in 2009 from Key’s Download, PlatEAU, and the Tear Garden.

To my ears, Handover has so much in common with those 2009 releases that I suspect it was made from their outtakes with Ogre brought in after the fact. “Gambatte” in particular feels Frankensteined from bits of Download tacked onto Ogre’s verses while “Icktums” and “Point” sound like PlatEAU. On half of the tracks the vocals are so buried and so disjointed from the music that it feels like you’re listening to Key’s projects in one room while your roommate listens to Ogre down the hall.

With all that said, Handover is not without its charms. In its best moments, there’s a dreaminess and even a delicacy mixed with the noise, such as on the airy opener “Ovirt” or the more experimental textures of “NoiseX.”

Overall, Handover is a mixed bag. cEvin and Ogre are capable of much more. I’m already starting to hear rumors and rumblings about the next Skinny Puppy album, let’s hope it sees the boys back to form now that they seem to have gotten over all those hurdles.