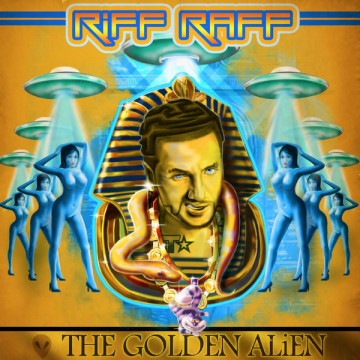 Jody Highroller is an undeniable and entertaining swag chef. Some people might call his music “shitty Hip-Hop,” but something about it is just so drool-worthy. Riff Raff is most commonly known for being on MTV’s G’s to Gents (where Fonzworth Bentley called him “one of the most colourful characters,” and also where we saw and heard this highly entertaining individual rap). His series of YouTube videos are most entertaining for his ridiculousness and ‘swag.’ The Golden Alien is a 39-minute album of rough around the edges, and possibly unfinished tracks. “Orion’s Belt” sounded like it was just cut dead in the middle of the track and left as is and thrown anywhere onto the album. However, that’s Riff Raff. Unpredictable at times. And his fans and those familiar with him will still love it. “Lil Mama,” the first track on the album, is probably the best track on this album as well in that it’s so distinctly his own. “Rice Out” is the second best cut, featuring Rap-talk with a bit of an electric feel.

The Golden Alien sounds a bit bland and doesn’t hold a lot of weight to it quality-wise. Overall this album just screams Riff Raff. It met expectations, except for the rough and choppy tracks. You don’t need to be the biggest fan of Rap to be entertained by Riff Raff’s ridiculousness. You can call him organic because there is really nobody like Jody Highroller Christian. Here, watch Riff Raff speak about his Master Swag.